The death toll in the Bhubaneswar's Sum Hospital fire has risen to 24. 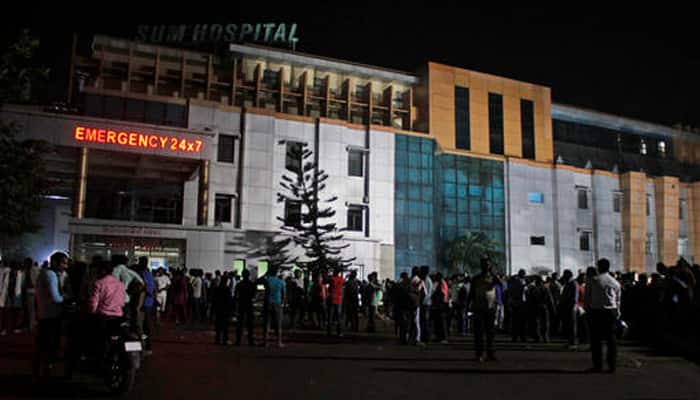 Bhubaneswar: The death toll in the Bhubaneswar's Sum Hospital fire has risen to 24.

Spoke to CM @Naveen_Odisha about the distressing hospital fire tragedy. Assured all possible support from the Centre.

Also spoken to Minister @dpradhanbjp and asked him to ensure all possible help to the injured and affected.

Spoke to Minister @JPNadda & asked him to facilitate transfer of all those injured to AIIMS. Hope the injured recover quickly.

A major fire had broken out at the Sum Hospital here on Monday evening, in one of the worst such incidents involving a medical facility in Odisha.

"Deeply anguished by the loss of lives in the hospital fire in Odisha. The tragedy is mind-numbing. My thoughts are with bereaved families (sic)," PM Narendra Modi tweeted.

Deeply anguished by the loss of lives in the hospital fire in Odisha. The tragedy is mind-numbing. My thoughts are with bereaved families.

While 14 patients were received 'brought dead' at the Capital Hospital, eight were 'brought dead' to AMRI Hospital from the fire-struck private medical facility, officials said.

The Capital Hospital Superintendent Dr Binod Kumar Mishra said, "We have received 14 dead bodies, while five other patients have been shifted from Sum Hospital."

"Most of the victims were in the first floor ICU of the ill-fated Sum Hospital," a doctor at the Capital Hospital said.

The blaze was suspected to have been triggered by an electric short circuit in the dialysis ward on the first floor of the private hospital which spread to the nearby Intensive Care Unit (ICU).

The fire rapidly spread to other areas on the same floor of the four-storeyed hospital building.

The commissionerate of police and fire brigade personnel along with volunteers and hospital staff launched a massive rescue operation as more than 500 indoor patients were trapped in the building, hospital officials said.

At least seven fire tenders were pressed into service to control the blaze and over a dozen ambulances deployed to shift the critical patients to other hospitals.

Many patients were rescued by breaking window panes, an eyewitness said.

Meanwhile, the state government has ordered a high-level probe by the Director, Medical Education and Training, into the incident.