ifteen more fatalities were confirmed Saturday from a barrage of bombings in Kabul, taking the toll to 51 in the deadliest day in the Afghan capital since the NATO combat mission ended in December. 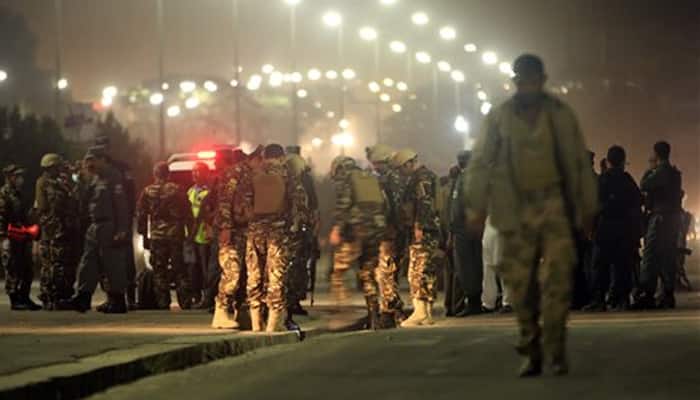 Kabul: Fifteen more fatalities were confirmed Saturday from a barrage of bombings in Kabul, taking the toll to 51 in the deadliest day in the Afghan capital since the NATO combat mission ended in December.

The explosions on Friday, which devastated buildings and overwhelmed hospitals with hundreds of casualties, were the first major militant assaults on Kabul since the announcement of Taliban leader Mullah Omar`s death.

The attacks underscored the volatile security situation in Afghanistan amid a faltering peace process and the potency of the Taliban insurgency despite being riven by growing internal divisions.

In the first attack, a powerful truck bomb tore through the centre of Kabul just after midnight on Friday, killing 15 civilians and wounding 240 others.

Less than 24 hours later, 27 cadets and civilians were killed when a suicide bomber dressed in police uniform blew himself up at the entrance of Kabul Police Academy.

Explosions and gunfire also erupted when Camp Integrity, a US special forces base in Kabul, came under attack late Friday, killing nine people, including a NATO service member.

The Taliban distanced themselves from the truck bombing which struck near a Kabul military base -- as they usually do in attacks that result in mass civilian casualties.

But they claimed responsibility for both other attacks, which marked a serious breach of security at a premier training institute for Afghan forces and a foreign coalition facility.

The carnage highlighted the risk of a bloodier insurgency under a new Taliban leadership as Afghan forces face their first summer fighting season without full NATO support.Friday`s bombings were the first major attacks since Mullah Akhtar Mansour was named as the new Taliban chief last week in an acrimonious power transition after the insurgents confirmed the death of longtime leader Mullah Omar.

Experts say the escalating violence demonstrates Mullah Mansour`s attempt to boost his image among Taliban cadres and drive attention away from internal rifts over his leadership.

"The new wave of attacks is a tactic by the Taliban`s new leadership to show they are capable, potent and operational," said security analyst Abdul Hadi Khaled.

"The demise of Mullah Omar divided the movement and affected the morale of their ground fighters. Hitting Kabul with a wave of powerful attacks is a way of showcasing their strength."

Mansour is seen as a pragmatist and a proponent of peace talks, but he also has powerful rivals within the Taliban who are strongly opposed to negotiations with the Afghan government.

After 13 years of war US-led NATO forces ended their combat mission in Afghanistan in December, leaving behind a 13,000-strong residual force for training and counter-terrorism operations.

Friday`s attacks marked Kabul`s deadliest day since the end of that mission.

People wounded in the attacks were pouring into city hospitals, officials said, with reports emerging of blood shortages and urgent appeals for donors circulating on social media.

In the deadliest attack, a suicide attacker managed to place himself in a queue as police trainees were waiting to be searched before entering the academy, killing 27, two security officials told AFP.

Anguished relatives of cadets gathered near the academy, which was cordoned off by heavily armed security officials as ambulances with wailing sirens rushed to the scene.

Four militants including a suicide car bomber also launched an attack on Camp Integrity, triggering explosions and an hours-long firefight, with military jets heard flying over the centre of Kabul.

NATO did not reveal the nationalities of the victims, but a local security firm contracted to guard the camp said eight were Afghans.

Earlier Friday, a truck bomb detonated near an army base in the neighbourhood of Shah Shaheed, rattling homes across the city, ripping off the facades of buildings and leaving scattered piles of rubble.