Hillary Clinton has pneumonia, was dehydrated at 9/11 event: Doctor

Democratic presidential nominee Hillary Clinton has been suffering from pneumonia and "became overheated and dehydrated" during a 9/11 remembrance ceremony in New York on Sunday, but is "recovering nicely," her doctor said. 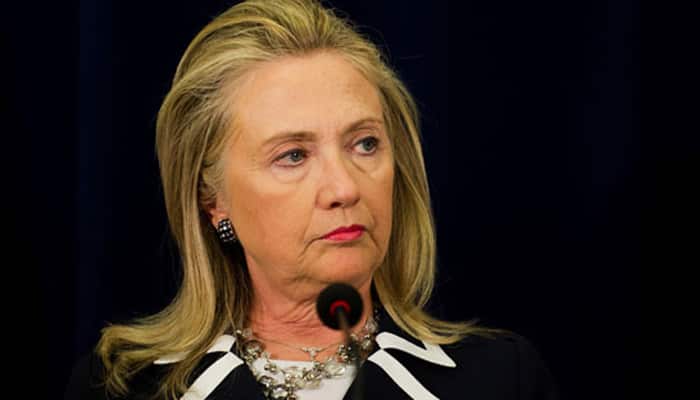 New York: Democratic presidential candidate Hillary Clinton is suffering from pneumonia and was overheated and dehydrated when she quickly left a 9/11 memorial ceremony in New York on Sunday, her doctor said.

The incident at Ground Zero, in which the 68-year-old Clinton seemed to lose her footing as she was helped into her vehicle, sparked new questions about her health -- and offered Donald Trump a new opening to attack his White House rival.

Clinton had been seeking to bounce back from a campaign blunder Friday, when she told donors that half of Trump`s supporters belonged in a "basket of deplorables" -- so Sunday`s episode was certainly ill-timed.

The former secretary of state spent 90 minutes at the high-profile ceremony in lower Manhattan, greeting some family members of those killed in the deadly terror strikes 15 years ago, her campaign said in a statement.

"During the ceremony, she felt overheated so departed to go to her daughter`s apartment, and is feeling much better," it added.

Later, the campaign released a fresh statement from her personal doctor, Lisa Bardack, who revealed that Clinton had been diagnosed with pneumonia and was suffering from dehydration.

"Secretary Clinton has been experiencing a cough related to allergies. On Friday, during follow-up evaluation of her prolonged cough, she was diagnosed with pneumonia," Bardack said.

"She was put on antibiotics, and advised to rest and modify her schedule. While at this morning`s event, she became overheated and dehydrated. I have just examined her and she is now re-hydrated and recovering nicely."

A campaign aide said Clinton had been examined at her home in Chappaqua, New York, after she was forced to leave Ground Zero.A video posted on Twitter showed Clinton seeming unsteady as she waited to get into a black van to leave the emotional 9/11 service.

She appeared to stumble as she was helped into the vehicle, and had to be held up on either side by members of her entourage.

It was a humid day in New York, with temperatures around 82 degrees Fahrenheit (28 Celsius).

"I didn`t see anything unusual. What I can tell you is that many of us (had) a sigh of relief when a gust of wind would come by because it was incredibly stifling," Democratic Congressman Joe Crowley, who stood near Clinton for about an hour at the ceremony, told MSNBC.

Clinton appeared better as she walked out of her daughter Chelsea`s home a few hours later, smiling for the media and posing for pictures with a young girl before departing for Chappaqua.

But a senior campaign aide said a planned fundraising trip to California on Monday was "currently in discussion."Trump -- who also attended the 9/11 ceremony -- was uncharacteristically silent on Twitter about Clinton`s illness, as both candidates took a break from formal campaigning to mark the somber day of remembrance.

But the businessman, his spokespeople and surrogates have promoted the idea in recent weeks that Clinton has serious health problems.

The internet is awash with claims that she may have a brain tumor, Parkinson`s or dementia.

Trump, 70, has said Clinton is "not strong enough to be president" and that she "lacks the mental and physical stamina to take on ISIS."

The root of the claims lies in 2012, when Clinton was nearing the end of her stint as secretary of state. A stomach virus and dehydration prompted her to faint, causing what her doctor said was a concussion.

They said they found a blood clot on the brain and Clinton temporarily suffered from double vision. She was later given the all-clear.

The former first lady has dismissed "conspiracy theories" about her health and pointed to a letter from her doctor declaring her fit to serve as president.Clinton`s illness is unlikely to be a turning point in the White House race, said Jennifer Lawless, a professor of government at American University in Washington.

"What the Clinton campaign needs to do over the course of the next several days is demonstrate her vitality and viability. She has to be at tons of events and seem very energetic," Lawless told AFP.

Larry Sabato, a veteran political scientist at the University of Virginia, said Clinton`s team needs to release a full health record to put the story to rest.

"We really haven`t gotten very much, essentially a letter from her doctor," he told CNN, but added that Trump should be held to the same requirement.

Clinton`s illness struck after she told a crowd at a fundraiser late Friday that "to be grossly generalistic, you could put half of Trump`s supporters into what I call the basket of deplorables."

"The racist, sexist, homophobic, xenophobic, Islamophobic -- you name it."

Trump and his supporters slammed the remarks. Clinton said she regretted saying "half," but then listed a number of "deplorable" things about Trump.

"I won`t stop calling out bigotry and racist rhetoric in this campaign," she said.

A Washington Post-ABC News poll out Sunday -- conducted in the days before she made the remark -- shows Clinton leading Trump 46 percent to 41 percent among likely voters, with a 4.5 percentage-point margin of error.