President Barack Obama made a rare visit to the Pentagon to get an update from military leaders on the campaign against the Islamic State. 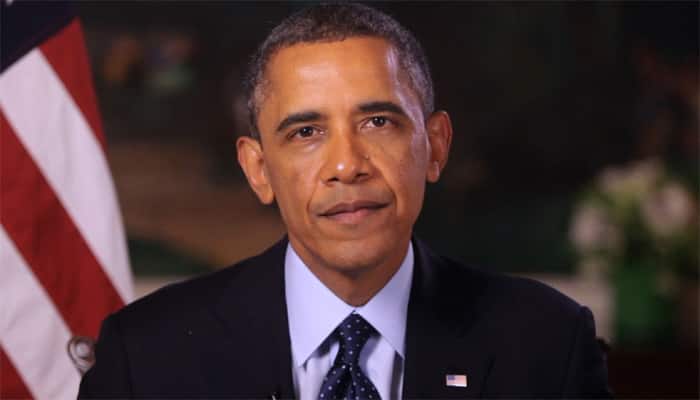 Washington: President Barack Obama portrayed the US-led coalition Monday as gaining ground against the Islamic State amid an expanded US effort and ample signs of progress, but conceded more difficulties lay ahead in fighting what he described as a nimble and opportunistic enemy.

"We're starting to see some progress," the president said during a rare visit to the Pentagon, ticking off a list of towns in Iraq and Syria he said had been wrested from IS control in recent weeks.

Flanked by top military commanders, Obama also warned of the Islamic State's efforts to recruit and inspire vulnerable people in the United States, and called on the American Muslim community to "step up in terms of pushing back as hard as they can." He said that while the US is now better prepared to thwart large-scale terrorist attacks like 9/11, the threat from individual "lone wolves" or small terrorist cells has increased.

"We're going to have to pick up our game to prevent these attacks," Obama said.

The Pentagon visit followed a wave of weekend airstrikes by the US-led coalition in eastern Syria, including the de facto IS capital of Raqqa, in one of the most sustained aerial operations carried out in Syria to date. Obama pointed to those and other airstrikes as proof of an intensified US effort to undermine the militant group's base of operations and cut off their sources of funding.

Obama's afternoon visit to the Pentagon offered a public display of presidential support for the military one day before Defense Secretary Ash Carter and Joint Chiefs of Staff Chairman Martin Dempsey were expected to be grilled on Capitol Hill. Senate Armed Services Chairman John McCain has sharply criticized Obama for not doing more militarily to defeat IS, and said Monday that the US is losing the battle as the extremist group continues to gain territory in Iraq and Syria.

"President Obama's comments today reveal the disturbing degree of self-delusion that characterizes the administration's campaign against ISIL," McCain said, using another acronym for the group.

Although the president said there were "no current plans" to send more US troops to Iraq, he did not rule out that possibility in the future. Obama has vowed to keep American service members out of direct combat, but has sent more than 3,000 US troops to advise and assist the beleaguered Iraqi military — including the deployment of 450 additional service members announced last month.

Efforts to train local forces in Iraq and Syria, however, have been slow to take shape. Last month, Obama acknowledged that the US lacks a "complete strategy" for training Iraqi troops to carry out ground missions. And in Syria, fewer than 100 rebels are being trained by the US, far fewer than the goal of producing 5,400 fighters a year.

At the Pentagon, Obama also walked a fine line on whether he'll sign a massive defense policy bill favored by Republicans. The White House has threatened to veto the bill, arguing that it uses gimmickry to increase defense spending without increasing domestic spending by an equal amount, as Obama has insisted. Some Republicans have questioned, however, whether Obama would really veto the bill should it come to his desk.

"Our men and women are going to get paid," Obama said, noting that US service members haven't missed a paycheck since he took office. Yet he also insisted he wouldn't accept a bill that shortchanges long-term investments in technology, education and the economy. "We're not going to eat our seed corn by devoting too much money on things we don't need now and robbing ourselves of the capacity to make sure that we're prepared for future threats."

Fidel Castro meets with 5 Cuban agents once held by US