In view of Cyclone Fani, all flights to and from Bhubaneswar have been cancelled for 24 hours starting midnight of May 3. 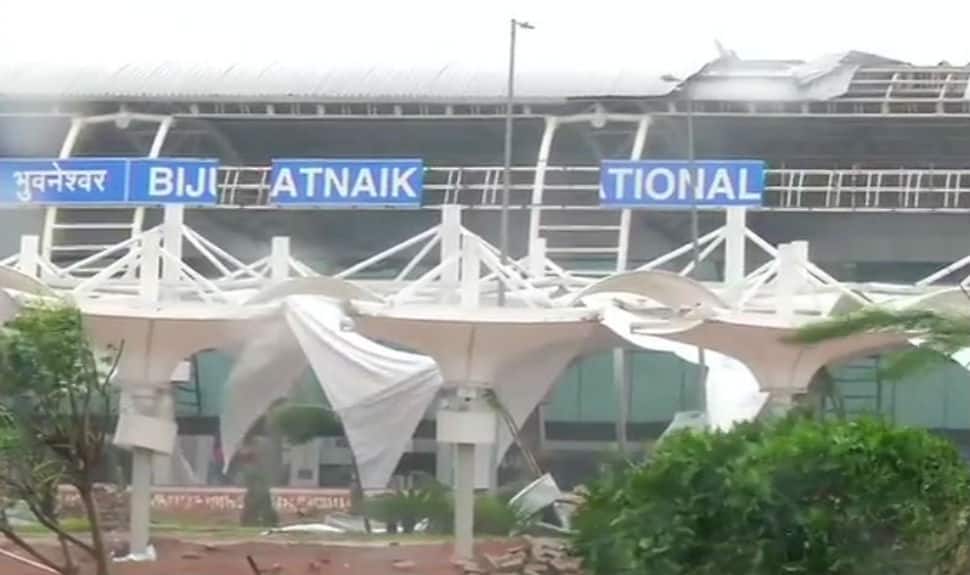 Strong winds at the speed of 92 kmph, gusting to 130 kmph, hit Bhubaneswar's Biju Patnaik Airport, blowing off the rooftops, which lead to massive destruction.

In view of the cyclone, all flights to and from Bhubaneswar have been cancelled for 24 hours starting midnight of May 3, Directorate General of Civil Aviation (DGCA) said on Thursday. Also, flights from Netaji Subhas Chandra Bose International Airport in Kolkata were cancelled till Saturday.

Meanwhile, in another part of the town, a college bus overturned due to the strong winds.

Cyclone Fani is very likely to continue to move north-northeastwards and weaken further into a severe cyclonic storm during the next nine hours.

At least three people have died due to the cyclone. It made landfall around 8 am on Friday in Puri, with roaring winds flattening huts, enveloping the pilgrim town in sheets of rain, and submerging homes in residential areas.

A massive operation was launched in Odisha on Thursday to evacuate over eight lakh people from low-lying coastal areas as the extremely severe cyclonic storm Fani moved closer to the eastern coast.

Cyclone Fani is likely to enter West Bengal by midnight to Saturday early morning. "Extremely severe cyclone Fani crossed the Odisha coast near Puri with the eye of the storm over land, however over the last hour or so the storm has weakened into a severe cyclonic storm," Regional Meteorological Centre`s Director Sanjib Bandyopadhyay said.

"It is currently situated at about 370 km southwest of Kolkata and 227 km southwest of the East Midnapore district sea resort Digha. It will move in north-northeast directions to enter the state," he added.

Other precautionary measures like cancellation of trains and water transport services have also been taken.

Prime Minister Narendra Modi on Friday said over Rs 1,000 crore had been released in advance for the states affected by Cyclone Fani.

Cyclone Fani: DGCA will issue revised advisories to airlines as and when necessary, says Suresh Prabhu