Aamir Khan's 21-year-old daughter Ira has shared a picture with boyfriend and her caption has left us worried if everything is okay between them.

New Delhi: Bollywood actor Aamir Khan's daughter Ira Khan is undeniably the new star kid on the block. Despite keeping a safe distance from showbiz, the star kid often grabs headlines, be it for her bold photoshoots or her cosy picture with boyfriend Mishaal Kirpalani.

It was only a few months ago in June this year when Ira confirmed her relationship with Mishaal and it became the talk of the town. However, her latest post on Instagram suggests that there's some trouble in their paradise.

Ira shared a fresh new picture with boyfriend Mishaal on Instagram on Thursday and it was her caption that caught our attention. Sharing a picture from a cafe-looking like place, with Mishaal hugging her from behind, she wrote, "Everything will be okay". She put up hashtags like, "#missyou #life #existentialcrisis #acceptance #notsomidlifecrisis #love #relationship #sofarsogood #us #theworld #humanity #keepcalm #itsokay #smile" along with the picture. 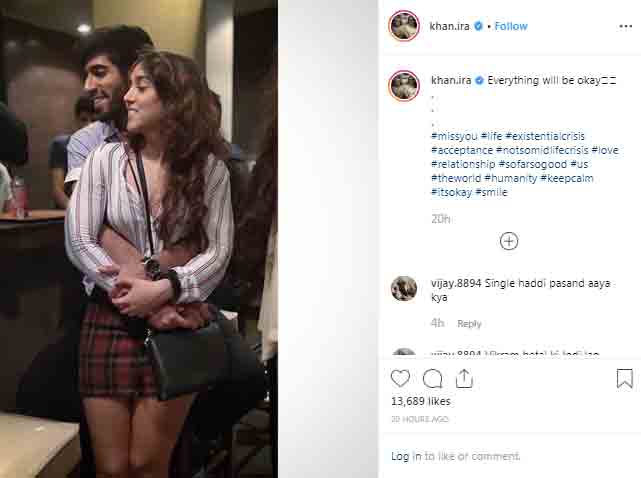 Reportedly, Mishaal is a music composer and the two have been dating for quite some time now.

Ira and Junaid are Aamir's children with first wife Reena Dutta. The superstar was last seen in YRF's 'Thugs Of Hindostan' and is currently busy working on his next big project. Speaking of Ira's Bollywood plans, Aamir said during an interview with IANS that she might be interested in filmmaking.

According to a DNA report, Ira is all set to make her directorial debut with a theatre play, Euripides’ Medea, which is a Greek tragedy. She has already commenced work on her directorial venture in full force. The premiere of the play is scheduled in December this year and will be staged in multiple cities across India.