Chris Hemsworth as fat, depressed Thor sings 'the saddest song in the world'

"Not sure why everyone`s so worried about Thor, he`s fine guys...," Chris Hemsworth wrote alongside a video of Thor from `Avengers: Endgame` where is seen playing an acoustic version of the Johnny Cash song `Hurt`. 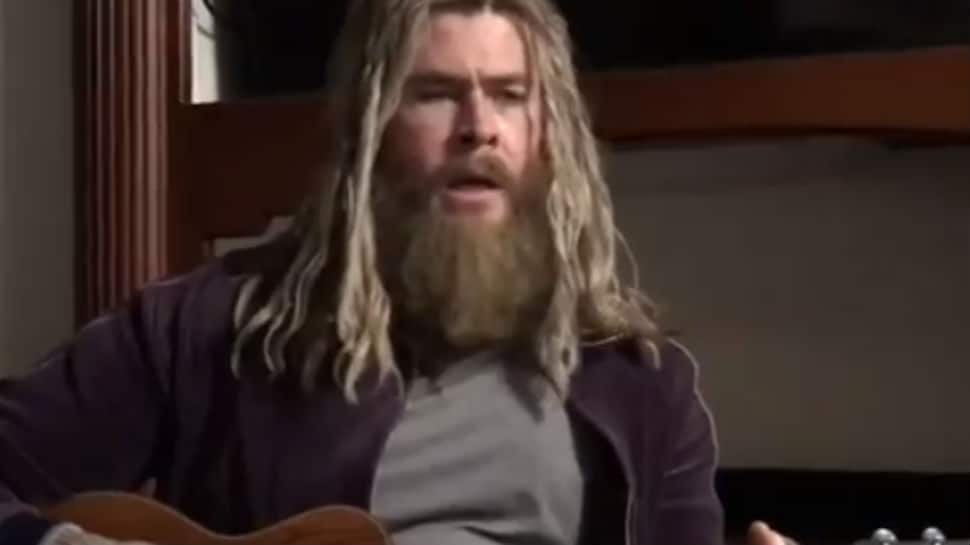 Washington DC: It seems like Thor has dropped the hammer and replaced it with a guitar. According to a life update on the Superhero, posted by Chris Hemsworth, he has immersed himself into recreational singing.

"Not sure why everyone`s so worried about Thor, he`s fine guys...," Hemsworth wrote alongside a video of Thor from `Avengers: Endgame` where is seen playing an acoustic version of the Johnny Cash song `Hurt`.

Not sure why everyone’s so worried about Thor, he’s fine guys...

In the final edition of Avengers, Hemsworth`s superhero character is featured as this shell of a person who is left all depressed by the loss of his friends and family. He gains a considerable amount of weight and drinks heavily.

"I hurt myself today, to see if I still feel," Hemsworth sings as tears trickle down his face.

On Thursday`s episode of `The Tonight Show with Jimmy Fallon`, the Hollywood actor stopped by and shared the video exclusively with the late-night host. He later posted the same on Instagram.

Explaining to Jimmy that he was playing the song to get into Thor`s character he said, "I didn`t know if I was ever going to show it. It`s the saddest song in the world. And I`m a terrible singer and a terrible guitarist."

The actor featured in the talk show to promote his latest film `Men in Black 3`.

If you are a star, you have to take the onus of introducing new talent: Varun Dhawan