Mira Rajput's latest pic with son Zain is too cute for words!

The young and pretty Mira is an avid user of the social media platform and most often shares incredible posts which are either pictures or videos.

New Delhi: Shahid Kapoor's doting wifey Mira Rajput Kapoor is a hands-on mommy to her two kids—Misha and Zain. The young and pretty Mira is an avid user of the social media platform and most often shares incredible posts which are either pictures or videos.

Mira shared a picture of her toddler son Zain as her Instagram story and we must say that it's too cute for words. She is holding her baby and looks like a picture perfect photo. Check out the screen grab here: 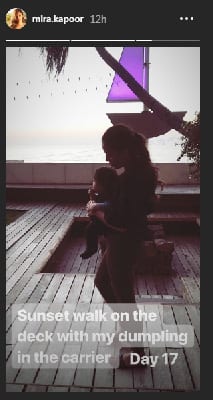 The duo has is often spotted chilling at various party hubs in Mumbai and is seen as one of the most good-looking couples around.

Hubby Shahid is busy working on 'Kabir Singh' with Kiara Advani, which is the Hindi remake of Telugu superhit 'Arjun Reddy' starring Vijay Deverakonda and Shalini Pandey in lead roles.