Blake Lively, who is expecting the couple`s third child, was seen dressed in a short-sleeved dress and white sneakers as she gave Ryan Reynolds a hug. 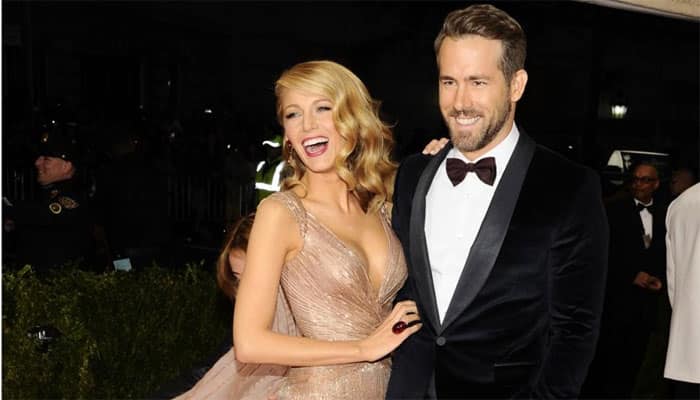 The pregnant actor-- who is expecting the couple`s third child -- was seen dressed in a short-sleeved dress and white sneakers as she gave her leading man a hug.

The 42-year-old actor shared the sweet moment on his Instagram story and wrote, "Great Scott!" Blake was previously snapped in Boston last month, where she was seen wearing a casual grey T-shirt that showed off her growing baby bump.

Earlier on Saturday, Reynolds posted a picture of himself and his co-stars in front of the Boston Flower Exchange and wrote, "The first day working with [Stranger Things actor] Joe Keery and [Pitch Perfect actor] Utkarsh Ambudkar. My arms feel so safe, draped loosely across their powerful shoulders."

Apart from Reynolds, Keery, and Ambudkar, the upcoming film also stars Channing Tatum and `Killing Eve`s` Jodie Comer. The action-comedy revolves around a bank teller who discovers he`s a background character in a video game.

Last month, Reynolds told PEOPLE that he and his wife don`t work at the same time in order to keep their family -- which includes daughters James, 4, and Inez, 2 1/2 -- together.

"We operate as a unit, and that works really well for us. The kids stay with us, and the family stays together, and that is where home is. So if we are in Spain or Utah or New York, as long as we are together, we`re home," the `Deadpool 2` actor said.

The couple, who got hitched in 2012, revealed that they were expecting a third child in early May when Blake appeared on the red carpet at the New York City premiere of `Pokemon: Detective Pikachu` in a yellow dress which showed off her bump.

"They are so happy and excited about having another baby," a source told PEOPLE at the time.

"They really are the most in-love and in-tune couple and very hands-on parents. They`d have a dozen kids if they could," the source added.

The would-be mother previously babbled about having a family, telling Allure in 2012 and as cited by People that, "I`ve always wanted a big family. Oh, I`d love 30 [children] if I could."