Sunil Gavaskar said the captain was just not flexible enough in his approach. 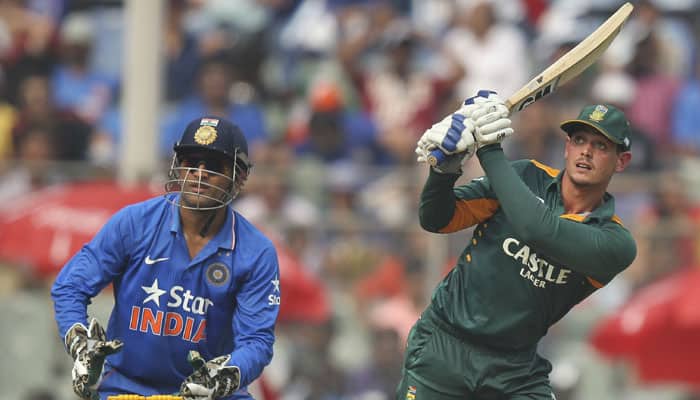 New Delhi: Critical of the way Mahendra Singh Dhoni rotated Indian bowlers during the crushing loss to South Africa in the ODI series-decider, former skipper Sunil Gavaskar said the captain was just not flexible enough in his approach.

The home side lost the match by a massive 214 runs in Mumbai last night, giving South Africa their first bilateral series win on Indian soil.

The Indians crumbled while chasing a mammoth target of 439 after the visiting team rode on swashbuckling hundreds by opener Quinton de Kock, Faf du Plessis and captain A B de Villiers.

The home bowlers cut a sorry figure in the face of the Proteas assault and all of them conceded over 6 runs an over.

"Mahendra Singh Dhoni had no flexibility while making bowling changes. But then again he didn't have much options.

Earlier also, we have seen that he has pretty set ideas when it comes to bowling changes. But none of the bowlers clicked today," Gavaskar told NDTV.

In fact, Gavaskar said bowling is a massive cause of concern for the Indian team as was exposed by the South African onslaught at the Wankhede.

"Bowling is a major worry for India now. We have seen in the T20I and ODI series how they have been ordinary. The Wankhede pitch had turn and good carry. But the Indian bowlers did not bowl accordingly. The fast bowlers were constantly using short pitched deliveries but at 135 kmph," he explained.

"You can never trouble South African batsmen with that pace. If you are attempting to attack them with bouncers, your speed should be around 145kmph. Today Bhuvneshwar and Mohit Sharma conceded too many runs," added Gavaskar.

The Indian attack was without its regular spin spearhead R Ashwin, who is nursing a side strain, and Gavaskar felt the offie should not be rushed back.

"I also think India missed Ashwin badly. I know he is too eager to play. He missed the last few matches but I saw him bowling in the nets ahead of the third ODI. I think he should not rush things as a side strain can stay with you for long.

He should be patient to recover before the Test series," said Gavaskar.

The batting great was effusive in his praise of the Proteas, especially de Villiers, and called him a Superman for his 61-ball 119.

"He is a superman. He is incredible. I think the secret of his success is his positioning. He can read the bowlers' mind and can get into the hitting position quite well. India need to find a solution to tackle him ahead of the Test series," he said.

"Also I also think Kagiso Rabada has been the find of this series. He is always eager to learn and is very down to earth. Rabada has good pace also and he will go a long way," he added.

Which of these players has the potential to solve India's all-rounder's woes? in Sports on LockerDome
Tags:
Sunil GavaskarMS DhoniIndiaSouth AfricaMohit Sharmacricket news
Next
Story