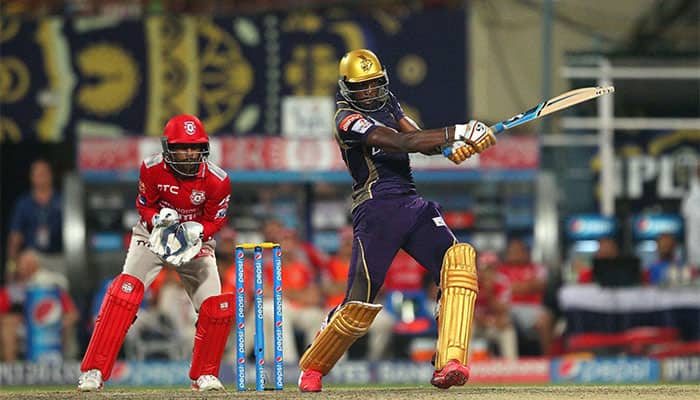 Chasing a stiff 184, KKR were reeling at 83/4 after 11 overs but Russell blasted 51 from 21 balls to turn it around for the defending champions.

In Punjab's home-leg too, Russell stood tall as his 66 from 48 balls had handed KKR a four-wicket win in Pune.

"The way Russell batted, he took the match away from us. He's been our tormentor this season. In the first match too he played blinder and on both the occasions we put KKR on tight spot. All credit to Russell for taking the game from us," Bangar said at the post-match news conference.

Bottom placed KXIP slumped to their ninth loss this season and are out of contention but Bangar still hoped to get his house in order.

"One can look at many things; batting did not click as a unit. We just need a little bit of luck here and there. Hope at some point it's going to be our way big time."

Asked whether losing had become a habit for the team, Bangar said, "I don't think so. In every game there has to be a winner and a loser. We all approach it as a fresh game and try to win the game every time. That's sport. If you don't end up winning you learn from it and take up the next game with same intensity."

Bangar disagreed that their motivation level was low.

"The boys batted well on a difficult wicket. Not many teams have posted 180 plus at the Eden Gardens against KKR. We've done that against this opposition earlier as well. The motivation was fabulous, it was great game of cricket."

He also showered praise on Sunil Narine who was back in his best with a tidy 4/19.

"He's going through a tough time, but he turned up and put up a real good performance for his team and that should augur well for him. At the same time, the effort of getting 183 was fabulous."

With Murali Vijay and Manan Vohra giving them a good start, Bangar also indicated that senior pro Virender Sehwag may just have to wait.

"At this moment I can't comment, this is a management decision but Vijay and Manan batted well so we have to see."