3rd ODI, India vs Zimbabwe 2016: With series in pocket, Men in Blue likely to test bench strength in final match

Taking Rayudu's place could be another uncapped batsman Mandeep Singh, who was a surprise pick in the 16-man squad alongside Fazal. 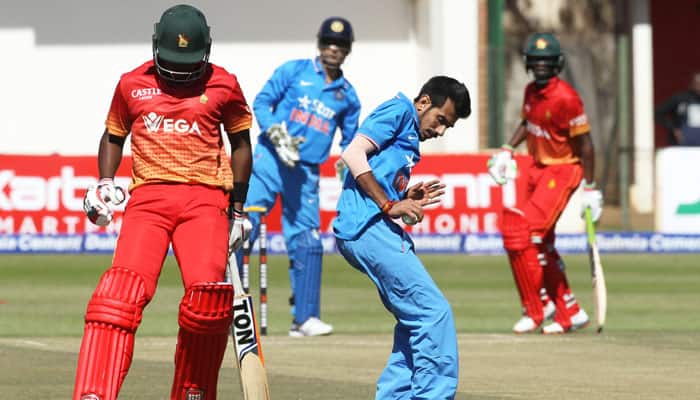 Harare: The series already pocketed, India would look to hand Zimbabwe a third successive whitewash while testing more youngsters when they take on the lacklustre hosts in the third and final One-day International here tomorrow.

Mahendra Singh Dhoni gave enough hints on changes in the playing eleven after two easy wins against the hosts, who have proved no match even for a second-string Indian team.

The series so far has been a lopsided affair and fans of either side will be hoping for a closer contest at the Harare Sports Club to help generate some interest in the short rubber, to be followed by three T20 Internationals at the same venue.

A win tomorrow will give India a third successive series clean-sweep after the triumphs in 2013 and 2015.

Going by the words of skipper Dhoni, more changes are likely in the Indian batting order as only top three batsmen have got substantial time in the middle.

Opener Lokesh Rahul, who scored a memorable ton on his ODI debut, can be rested alongside number three Ambati Rayudu. The two have by far faced the most number of balls, 165 and 164 respectively.

If they are indeed benched, uncapped Faiz Fazal can open with Karun Nair, who made 39 off 68 balls in the run chase yesterday after a failure in the first match.

Taking Rayudu's place could be another uncapped batsman Mandeep Singh, who was a surprise pick in the 16-man squad alongside Fazal.

Barring the top three, the rest of the batsmen have not got an outing, so any other change in that department looks unlikely.

In fast bowling, Dhoni can rest either Barinder Sran, Dhawal Kulkarni or Jasprit Bumrah as all three performed their roles well in the earlier games.

If any of them is left out, the recalled Jaydev Unadkat can get a game and so could all-rounder Rishi Dhawan, who made his India debut during the ODI series in Australia in January.

Leg-spinner Yuzvendra Chahal, who made the cut after a fruitful IPL, has impressed in the two chances he has got and that included a three-wicket haul yesterday.

If off-spinner Jayant Yadav gets to make his debut, either Chahal or Axar Patel will be benched.

Dhoni has had no doubts about putting Zimbabwe in after winning two tosses in a row amid prevailing cold conditions here. It will be interesting to see what he opts for at the toss tomorrow, provided he gets third-time lucky.

A more batting-friendly pitch than the surfaces used so far can also add the much-needed spice to the game. Though the wicket used yesterday was better than the series opener, stroke-making remained a challenge.

Zimbabwe, on the other hand, can only go up from the current scenario and give their fans something to cheer about.

The home team has been throughly outplayed in all areas of the game so far.

The batsmen have failed to apply themselves against a spirited Indian attack, which has made most of the friendly morning conditions.

Zimbabwe did manage to gain some flow into the innings yesterday, largely due to the effort of Vusi Sibanda, who ended up with a gritty 53 off 69 balls and shared a 67-run stand with Sikandar Raza.

However, that partnership was the lone positive for the minnows, who collapsed to 126 all out after losing their last six men for 20 runs.

Captain Graeme Cremer partly blamed the toss for the poor batting effort after the last game before adding that his boys were capable of putting up a much better show.

On the bowling front, Zimbabwe have kept things tight with the new ball but that has not helped them as the bowlers have not looked like taking wickets.

Cremer will be hoping to get lucky with the toss and then the under-pressure batters to give his bowlers something to defend.

Even with a host of changes, India are expected to breeze through to the T20 series, but a closer contest would be more than welcome.

SHOCKING! Zimbabwean fans want their cricketers to be 'arrested' – Find out why!