Fans have clashed with French police for two days running in Marseille but England manager said his side are anxious to start the campaign. 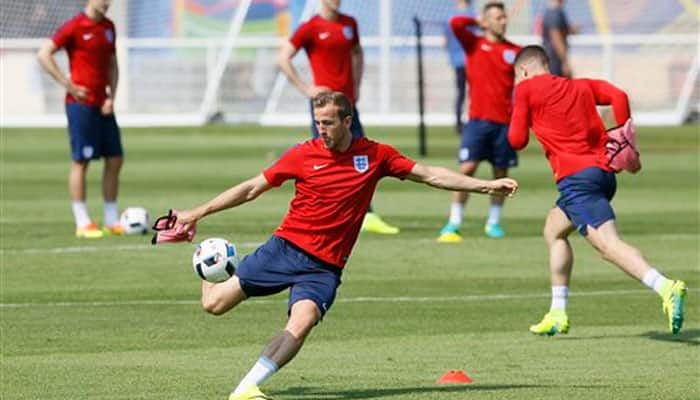 Real Madrid star Gareth Bale leads Wales` charge against Slovakia, whilst there will be the rare of sight of brothers going head-to-head as Arsenal`s new recruit Granit Xhaka faces older sibling Taulant when Switzerland play Albania on a packed day of action.

England were the only team in the finals to win all 10 qualifying matches and there is optimism that a new-look Three Lions could shock favourites France, Germany and Spain.

Premier League top-scorer Harry Kane is expected to lead the line. But Leicester City`s title-winning hero Jamie Vardy may have to settle for a place on the bench to accomodate captain and England`s all-time record goalscorer Wayne Rooney.

Fans have clashed with French police for two days running in Marseille but England manager said his side are anxious to start the campaign.

"We are fully aware of what a good team Russia are, we`re aware of their experience and of their quality," Hodgson said.

The most expensive player in the world will carry a nation`s hopes as Bale spearheads Wales` inaugural European Championship finals match against Slovakia in Bordeaux.

Bale scored seven goals in qualifying to lead Chris Coleman`s side to their first major tournament since 1958.

"Whenever there was a major championship on I would be sat at home, watching on TV, so to be involved is amazing," said Bale.

"I imagined qualifying. It was one of my dreams to do so, but to make dreams come true is not easy."

However, Slovakia have their own superstar of their own in Napoli captain Marek Hamsik.

The midfielder scored five times in qualifying, but played down suggestions that the match will be a shoot-out between him and Bale.

"I think Gareth is one of the best players in the world," said Hamsik.

"I wouldn`t like to compare myself to him. It won`t be a match between Gareth Bale and Marek Hamsik. It will be between Wales and Slovakia."

History will be made in Saturday`s first game should the Xhaka brothers line-up for opposing sides.

Granit, who cost Arsenal a reported 40 million euros, has opted to play for the country of his birth, Switzerland, whilst the lesser known Taulant chose Albania, the home of their parents who fled war-torn Kosovo in the 1990s.

"Anyone in a similar situation, who says it`s not a special game, is a liar," said Granit.

"For the 90 minutes, we`ll blend out the fact we`re brothers as professionals. May the best man win."

The Xhakas are not the only players that could have lined up for either side. There are six players in the Albania squad born in Switzerland, whilst a number of the Swiss side are of Kosovan descent, including Stoke City star Xherdan Shaqiri.

Some 300,000 Kosovans moved to Switzerland to escape the territory`s brutal war with Serbia in the 1990s.