France are hardly alone in struggling to put down weaker opponents, and they will be delighted to have emerged with the points against Australia, a win secured with great help from the VAR system and a lucky deflection. 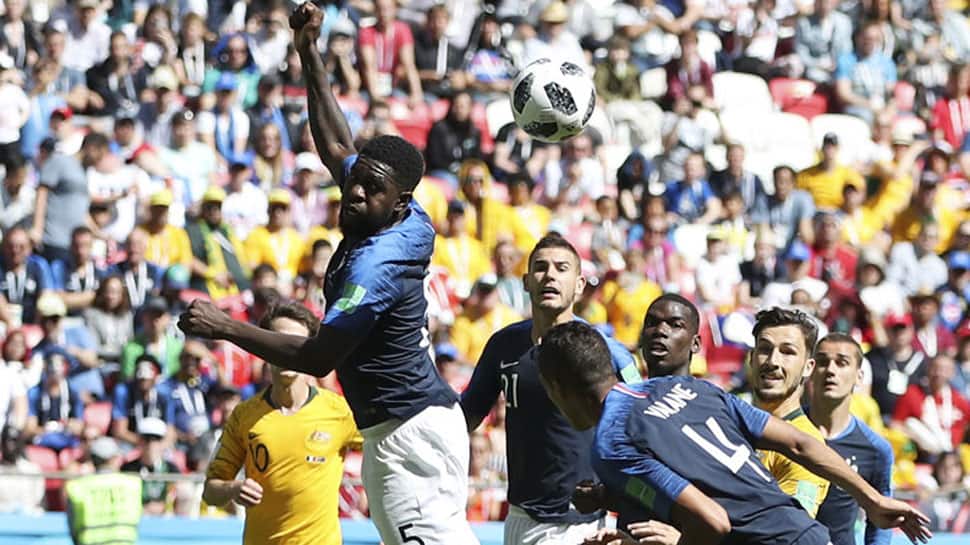 Kazan: A stodgy first performance against a gutsy Australia was enough to take France top of their group at the World Cup, but Didier Deschamps` side showed little to give tournament heavyweights like Brazil anything to worry about.

Les Bleus instead head into their next clash, against Peru in Ekaterinburg on Thursday, with lingering queries over their forward line`s effectiveness, and with their rivals emboldened that they could upset the 1998 champions.

Deschamps has placed great stock in the team`s young talents, rewarding Kylian Mbappe and Ousmane Dembele with starting roles in the front three with Antoine Griezmann at Kazan Arena.

Yet it took the experienced campaigner Olivier Giroud to break the deadlock as he came off the bench to feed Paul Pogba for his late winner.

The result aside, Bert van Marwijk`s well-drilled Socceroos put in a heroic defensive effort to stifle their opponents at Kazan Arena.

"In a lot of moments they didn`t know what to do any more,” the Dutchman stated bluntly, but correctly, of the French.

While Australia`s Switzerland-based central defender Trent Sainsbury boosted his hopes of graduating to a higher European league, the 36th-ranked Socceroos lack anything that could be described as a world class backline.

How France will hope to crack open the more highly rated Group C rivals Peru and Denmark, let alone a German or Spanish stonewall, is sure to preoccupy their 1998 World Cup hero Deschamps in the coming days.

The 49-year-old has an embarrassment of riches in his playing squad, but the Socceroos result showed he has yet to determine how best to deploy them.

The loss of Djibril Sidibe was a blow, forcing Benjamin Pavard to play at right-back after operating mostly as a central defender for Bundesliga side Stuttgart.

Pavard performed admirably, but there were problems further up the field.

While France looked dangerous going forward in the opening 15 minutes, once a nervous Australia had time to settle the picture changed.

From there, the midfield trio of Corentin Tolisso, N`Golo Kante and Pogba struggled to give good service to the forwards, all of whom showed impressive pace but little invention.

Although Pogba scored the winner, it was hardly a scintillating performance, and questions about his role in the side will remain.

Deschamps has gone to great lengths to accommodate him, including implementing a 4-3-3 formation to give the Manchester United playmaker more latitude.

"It suits him very well because he has the freedom to go forward, which he would not be at liberty to do if we were playing with two defensive midfielders," said Deschamps.

The manager suggested he would persist with the set-up and was defiant that his team had done everything asked of them, except produce more pace in their transitions forward.

France are hardly alone in struggling to put down weaker opponents, and they will be delighted to have emerged with the points against Australia, a win secured with great help from the VAR system and a lucky deflection.

Such fortune is unlikely to be repeated, however, and Deschamps is running out of time to find a combination that clicks.