Switzerland will take on Sweden in the round of 16. Unfortunately, Fabian Schar and Stephan Lichtsteiner will miss the pre-quarters for Switzerland after picking up two yellow cards. 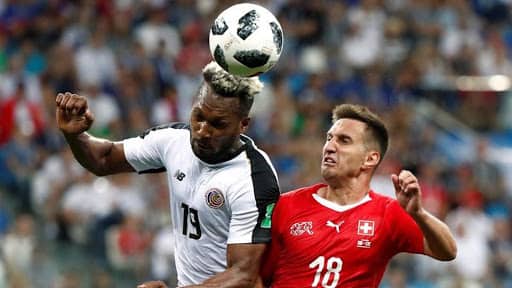 Moscow:  Switzerland would be happy with the 2-2 draw with Costa Rica, as they make it to the knockout stages. Costa Rica fought till the end and will be happy to end their World Cup campaign on a positive note. Switzerland will take on Sweden in the round of 16. Unfortunately, Fabian Schar and Stephan Lichtsteiner will miss the pre-quarters for Switzerland after picking up two yellow cards.

90+3 minute: GOAL!!! Bryan Ruiz hits the crossbar but the ball hits goalkeeper Sommer on the back and finds its way into the net.

90 minute: NO PENALTY! The referee overturns his decision after VAR disregards it. Bryan Ruiz had gone down in the box but it was offside.

88 minute: GOAL!!! Switzerland's Drmic scores a stunning goal into the bottom right corner off a brilliant cross from Denis Zakaria.

83 minute: Yellow card! Switzerland Fabian Schar gets booked for a challenge on Campbell.

75 minute: Yellow card! Switzerland's D. Zakaria gets booked for a foul on Gamboa.

74 minute: Free-kick to Switzerland as Shaqiri goes down after a challenge from Costa Rica's Oviedo.

Costa Rica have not had a single win in their last five World Cup matches. They would want to change that today.

69 minute: Substitution for Switzerland. J. Drmic in for M. Gavranovic.

68 minute: The Swiss players are pushing hard but the team management would keep an eye in the other Group E clash, where Brazil lead Serbia 2-0.

60 minute: Substitution for Switzerland. D. Zakaria in for V. Behrami.

56 minute: GOAL!!! Waston powers a header into the Swiss goal off a corner.

54  minute: MISS! Costa Rica's Oviedo goes umarked in the Swiss penalty box but skies the ball away from the goal. Costa Rica are giving away golden opportunities.

50 minute: Costa Rica look confident in the midfield but fail to make most of their chances in the final third. They certainly want to bow out with a win here.

46 minute: Free-kick to Switzerland as Shaqiri goes down after a challenge from Oviedo.

#SUI are 45 minutes away from the knock-outs as it stands... #SUICRC pic.twitter.com/syOBTqC3of

43 minute: Switzerland's Embolo sprints in the left flank and crosses the ball from the far corner but fails to trouble the Costa Rican goalkeeper.

39 minute: Lichtsteiner finds Shaqiri with a brilliant through ball but the ball is cleared away by a Costa Rican defender. Corner for Switzerland.

31 minute: GOAL!!! Switzerland's Dzemaili waits for the ball to drop and shoots a powerful volley to take Switzerland 1-0.

24 minute: Another brilliant attack by Costa Rica. Colindres threatened to score from the box but his shot is blocked by a Swiss defender. Corner for Costa Rica.

20 minute: Costa Rica's Oviedo attempts a shot from distance but misses the target by a whisker. That was close. Costa Rica continue to keep goalkeeper Sommer busy.

17 minute: Switzerland's Gavranovic picks up a pass from Shaqiri on the left, but hits the ball wide. MISS!

11 minute: Yellow card! Costa Rica's Gamboa gets a yellow card for a challenge on Embolo.

10 minute: Daniel Colindres latches on to an error by a Swiss player near the box and fires the ball towards the goal but the ball hits the sidebar. What an effort.

7 minute: Costa Rica's Colindres picks up a pass near the box but clouds the ball away.

6 minute:  That was close! The Costa Rican players are up and attacking with three shots on target in less than a minute. Switzerland look sloppy in the midfield, they need to be careful here.

4 minute: Shaqiri finds space on the right-flank and passes it to a teammate in this box but his shot is blocked by the Costa Rican defender.

2 minute: Free-kick to Switzerland in a dangerous position. Shaqiri shoots the ball wide from the Costa Rican goal.

The Swiss team would look to continue their good form after a 2-1 win over Serbia and a remarkable 1-1 draw against Brazil. However, Costa Rica, who lost both their opening group games, will fancy a consolation win over Switzerland.