Gujarat began the second half brightly as they inflicted an all out in the 23rd minute to lead 18-12. 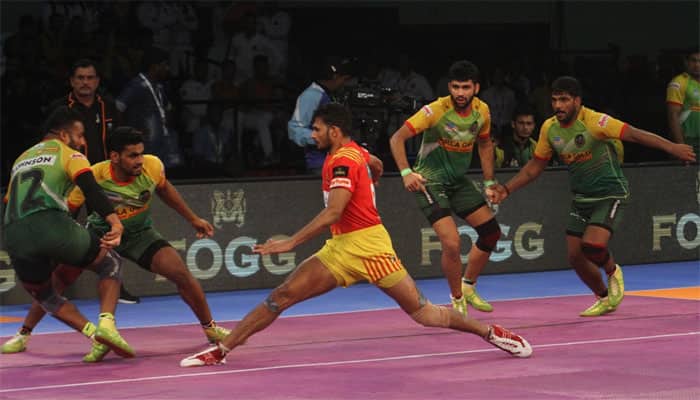 Chennai: In a battle of heavyweights in the Inter Zone Challenge Week of the fifth Pro Kabaddi Season, Gujarat Fortunegiants edged past Patna Pirates 30-29 here on Friday.

Parvesh Bhainswal and Abozar got high fives for Gujarat as they managed to keep Patna`s danger man Pardeep Narwal quiet for most of the match.

Narwal scored just five points and had his lowest scoring match of the season.

Gujarat are now on the top of the table in Zone A with 62 points from 17 matches, while Patna also are top in Zone B with 66 points from nine matches.

It was a low-scoring affair in the first half as both teams were cautious not to make errors.

It was 3-3 after five minutes as Gujarat kept Narwal out. Monu Goyat scored two points in two raids as Patna led 5-3. They then got tackle and raid points to lead 7-4 after seven minutes.

Gujarat however made it 8-9 in the 13th minute as Rohit Gulia scored with a two-point raid, and then they forced a super tackle in the 16th minute as they trailed 10-11.

Patna failed to score a point in the last five minutes of the first half as they trailed 11-14 at the break. Narwal scored just two raid points in the first half.

Gujarat began the second half brightly as they inflicted an all out in the 23rd minute to lead 18-12.

Parvesh Bhainswal got a high five in the 28th minute as Gujarat led 23-13. With Narwal on the bench, Patna were struggling to get points in the board.

Chandran Ranjit scored three points with a super raid in the 29th minute as Gujarat led 26-14.

The match was slipping from Patna`s hands but Narwal got a raid point as they trailed by 10 points after 30 minutes.

Jaideep got a high five for Patna as they trailed 24-29 after 36 minutes.

Gujarat`s defence did a splendid job on Patna raiders as Abozar got a high five to give his team 30-24 lead.

Patna forced their fourth super tackle in the 38th minute to trail 26-30. Narwal got a raid point in the 39th minute as his team trailed by just two points but Gujarat just managed to edge past by a point in the end.