Forwarded messages have been doing the rounds on messaging platforms that the veteran leader is in a serious condition. 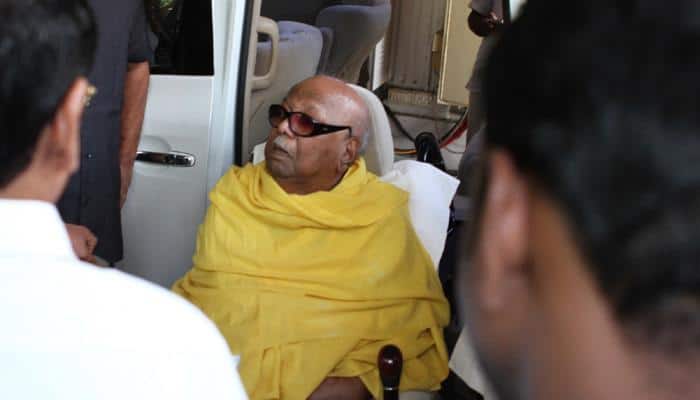 CHENNAI: DMK leader MK Stalin has said there is no truth to rumours that his father and party chief M Karunanidhi is in a serious condition. His statement to clear the air came after forwards on some instant messaging platforms claimed either that the veteran leader was dead or that he was in a terminal stage.

"Don't believe them. These are rumours," Stalin told reporters outside Karunanidhi's residence in Chennai's Gopalapuram. "He has a mild fever, and is receiving treatment. There is nothing to worry about and nothing shocking here," he added.

Karunanidhi, who turned 94 last month, was admitted to hospital in Chennai on July 18. The hospital had said he had undergone a procedure to replace his tracheostomy tube. He had the tube placed in December 2016 to help improve his breathing. Karunanidhi had been discharged after the procedure two days ago.

He had been taken to the hospital in that instance with breathing difficulty caused by a throat and lung infection that doctors said had been caused by some of the medication he had been taking.

Karunanidhi has hardly been active in politics since mid-2016, when his health began taking a turn for the worse. Since then, his DMK has retained him as its president, with Karunanidhi's son MK Stalin running things as working president.

The five-time Tamil Nadu Chief Minister has been confined to a wheel chair for close to a decade now, and last held office in 2011, when his party lost the election to the AIADMK.