Novak Djokovic is the only one of the golden trio to win every Grand Slam title at least twice and he is the first player since Rod Laver in 1969 to win the year’s first three Grand Slams. 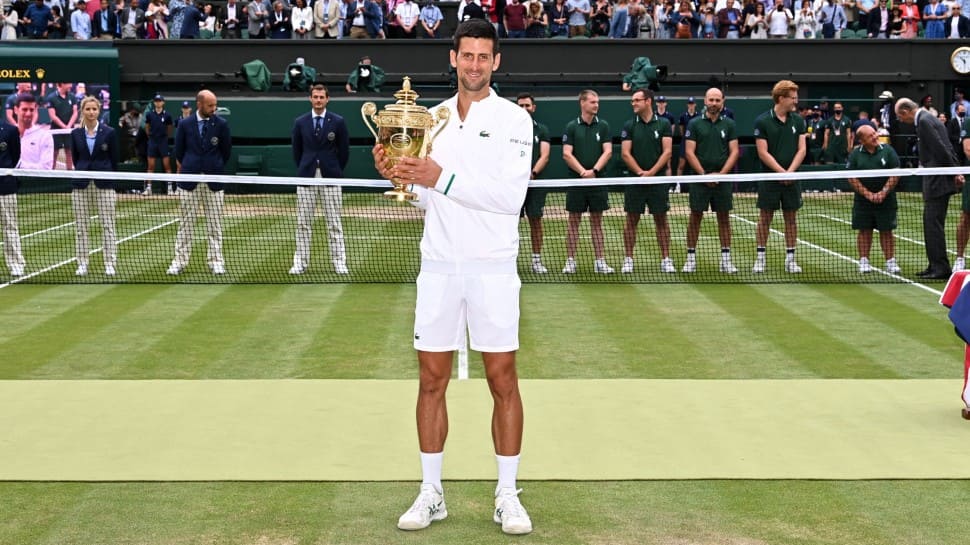 Novak Djokovic with the Wimbledon trophy after defeating Matteo Berrettini in the final. (Source: Twitter)
Share:
Written By:

The debate will rage on but Novak Djokovic believes he is the best player in the modern era after claiming a record-equalling 20th Grand Slam title by beating Italy’s Matteo Berrettini in the Wimbledon final on Sunday (July 11). By adding a sixth Wimbledon title to the second French Open he won last month and the ninth Australian crown he earned in February, the 34-year-old Serb has put together a sensational year which has moved him alongside Roger Federer and Rafa Nadal at the top of the list of men’s Grand Slam winners.

With Swiss Federer close to his 40th birthday and Spaniard Nadal, 35, having lost his grip on Roland Garros after losing to Djokovic this year, the Serb is destined to forge ahead. “I consider myself best and I believe that I am the best, otherwise I wouldn’t be talking confidently about winning slams and making history,” Djokovic, who withstood the ferocious firepower of Berrettini to win 6-7(4), 6-4, 6-4, 6-3 in a fever-pitch atmosphere on Centre Court, told reporters.

“But whether I’m the greatest of all time or not, I leave that debate to other people. I said before that it’s very difficult to compare the eras of tennis. We have different rackets, technology, balls, courts. It`s just completely different conditions that we’re playing in, so it’s very hard to compare tennis from 50 years ago to today.”

Djokovic declared himself ‘honoured to be part of the conversation’ but the evidence is stacking up in his favour after his third successive Wimbledon title. Djokovic is the only one of the golden trio to win every Grand Slam title at least twice and he is the first player since Rod Laver in 1969 to win the year’s first three Grand Slams.

Should he win a fourth US Open later this year he will match Laver’s calendar-year Slam of 1969 that has proven beyond all the greats since, including Federer and Nadal. He also holds the record for most weeks ranked number one on the ATP rankings – 328 and counting after surpassing Federer’s mark of 310 weeks in March. Incredibly, when Djokovic won his second Grand Slam title in 2011, Federer already had 16 and Nadal nine.

The relentless Serb said it was not until a few years ago that he thought he could challenge their duopoly. “I probably started thinking about trying to reach the record of most Grand Slams won, most weeks at number one, probably two to three years ago,” he said.

“Before that it seemed a little bit out of reach. I’ve always kind of believed that I could play my best tennis in Grand Slams and give myself a good chance to win any slam really on any surface because I know what I’m capable of. I know I have a very complete game that has proven to be successful on all surfaces in the past.

“It’s really fortunate for me and incredible that it’s all coming together in the same year. That’s something that I didn’t expect, but I always dream of achieving the biggest things.”