Shiv Sen chief and 18 party MPs will visit the birthplace of Lord Ram on Sunday and offer prayers at the makeshift Ram temple. 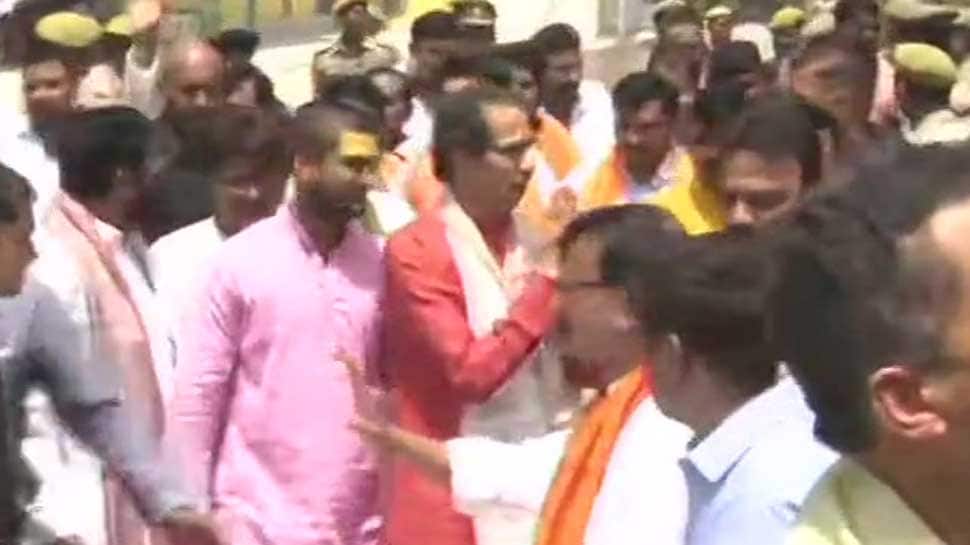 AYODHYA: Shiv Sena chief Uddhav Thackeray arrived in the holy city of Ayodhya in Uttar Pradesh on Sunday along with his 18 party MPs and offered prayers at the makeshift Ram temple here.

Shiv Sena chief visited the temple along with his son Aditya Thackeray and 18 newly-elected party MPs.

Shiv Sena chief and his party MLAs had arrived here around 10 AM.

They had left Mumbai this morning for Ayodhya.

Upon their arrival, the father-son duo was welcomed by Union Minister Arvind Sawant and party spokesperson Sanjay Raut.

He is scheduled to address a press conference later in the day and will then leave for Mumbai.

Speaking to reporters on Saturday, Shiv Sena MP Sanjay Raut confirmed that his party chief and 18 MPs will visit the birthplace of Lord Ram on Sunday and offer prayers at the makeshift Ram temple.

Raut, however, added that  Ayodhya and Ram temple are not subjects of politics for his party, but a matter of faith and religion.

''We have never sought votes in the name of the temple and will never do so," he said.

Raut further reminded that Thackeray had promised to visit Ayodhya with his MPs after elections and he was simply fulfilling the promise.

The Shiv Sena MPs will return to Mumbai after offering prayers at the temple.

The Yogi Adityanath government has accorded the state guest status to Thackeray and Sena MPs.

Last November, the Shiv Sena chief and his family had visited Ayodhya, where he coined the slogan, "Pehle mandir, phir sarkar" (First temple, then government).

Ahead of Shiv Sena chief's visit, Raut said that the Ram temple will be constructed under the leadership of Prime Minister Narendra Modia and Chief Minister Yogi Adityanath.