The Union Minister was manhandled and heckled by a group of students of Jadavpur University during his visit to the campus to attend an event organised by ABVP in Kolkata on Thursday. He was rescued after Bengal Governor rushed to the University. 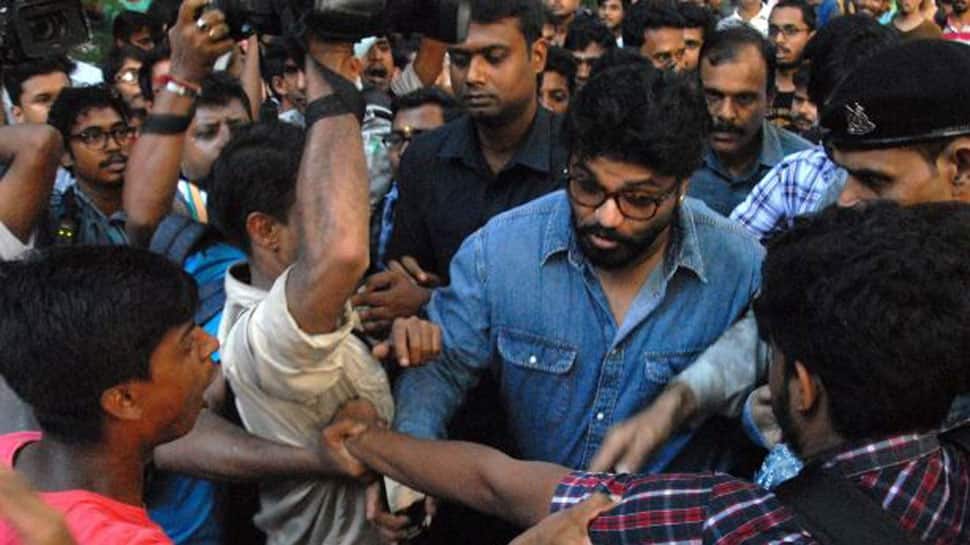 Jadavpur: BJP MP  and Union Minister Babul Supriyo was allegedly heckled and gheraoed by a group of students of Jadavpur University during his visit to the campus to attend an event organised by Akhil Bharatiya Vidyarthi Parishad (ABVP) in Kolkata on Thursday. He was rescued out of the campus after Bengal Governor Jagdeep Dhankar took serious note of the incident and rushed to the University.

In a press release, issued by the Raj Bhavan, it is mentioned that the alleged unlawful detention and assault on the Union Minister is a serious reflection of the law and order of the state and on the conduct of the law enforcing agencies.

Dhankhar spoke to state chief secretary Malay Kumar De, "who has indicated that a prompt direction is being issued to the Commissioner of Police". Earlier, Dhankhar spoke to Vice-Chancellor Suranjan Das and indicated to him that it was "improper" on his party not to have taken "prompt steps" in the matter, that can lead to "unwholesome results".

Earlier today, when Babul, accompanied with designer-turned-BJP leader Agnimitra Paul were entering the college campus, he were abrupted by a group of protesting students, who raised slogans against them, asking them to 'go back' while showing him flags of the Students Federation of India ( SFI) and the All India Students' Association (AISA).

The protesting students shouted that the 'BJP leader was not welcome on the campus'.

Supriyo was slapped, heckled, kicked by a large number of students, protesting his visit to the campus. One of them even pushed him to the ground even as his bodyguards and security personnel tried to throw a security ring around him.

"You people are trying to provoke me, create a commotion. But you can`t drive me out. Till the time you calm down, I won't go," Supriyo was heard telling the protestors.

Vice-Chancellor Suranjan Das tried to intervene and requested the students to let the Union Minister get inside the Jadavpur University; however, the students refused to listen to his plea. In between, the V-C rescued the minister and took him inside the campus. The students were stopped entering the V-C's office after which they began sloganeering again.

The V-C later complaint of ill health and was taken to a hospital.

Agnimitra Paul, who had accompanied Supriyo to the campus to attend the event, also faced the demonstration.

Later, the students blocked Supriyo's way again when he tried to leave the campus. He was again attacked, his spectacles fell off, and his shirt was torn.

Reacting to the incident, BJP leader Rahul Sinha says, "Jadavpur University has become a place for goons and anti-democratic. Every time, someone tries to organize an event on the campus, they are either heckled or stopped by the university students.

Governor spoke to the VC of Jadavpur University & indicated to him that it was improper for him not to have taken prompt steps in the matter, that can lead to unwholesome results. This is a very serious reflection on the law & order of the state

Meanwhile, West Bengal Governor  Jagdeep Dhankhar has taken strong note of the incident. Governor's Press Secretary said, ''With respect to the 'gherao' of Union Minister Babul Supriyo by a section of students, the Governor of the State has taken a very serious view and has spoken to the Chief Secretary of West Bengal.''

''Governor spoke to the VC of Jadavpur University and indicated to him that it was improper for him not to have taken prompt steps in the matter, that can lead to unwholesome results. This is a very serious reflection on the law & order of the state,'' he added.