At least 12 people were killed and 179 others injured on Sunday in a suicide car bombing in Afghanistan`s Ghazni city. The Taliban has claimed responsibility for the attack. 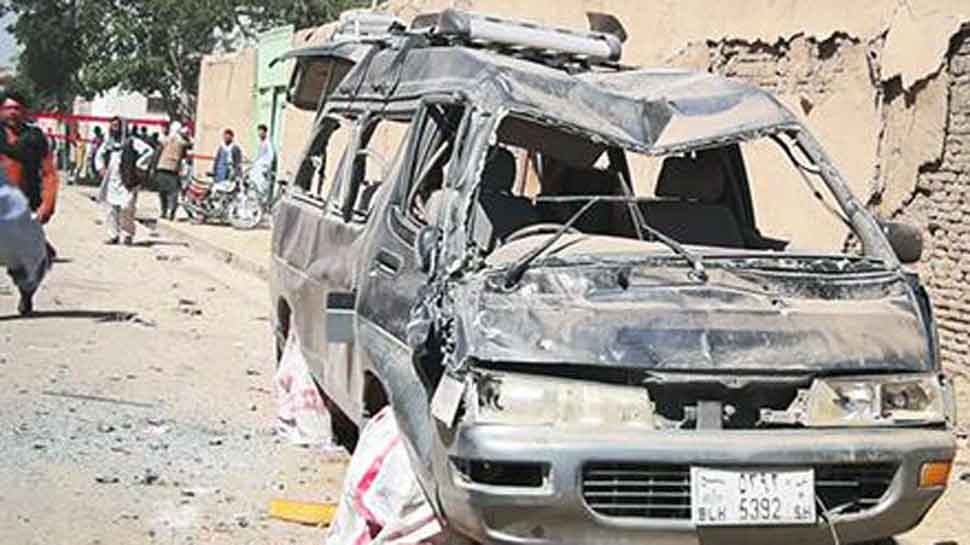 Kabul: At least 12 people were killed and 179 others injured on Sunday in a suicide car bombing in Afghanistan`s Ghazni city. The Taliban has claimed responsibility for the attack.

"The attack took place in the morning at around 8.30 a.m. near a local base of the National Directorate of Security (NDS) in Ghazni city," Arif Noori, a spokesman for the governor of Ghazni province, told Efe news.

"A key base of the National Directorate of Security in Ghazni city was targeted by a martyrdom-seeking attacker using a VBIED (vehicle-borne improvised explosive device).

"According to our initial information, the base was completely destroyed and tens of NDS forces and workers were killed and injured," Mujahid added.

The NDS said that the attack took place at a security check-post located at the first entrance of one of its facilities in Ghazni.

"Civilians living in nearby houses suffered the most," the NDS said, adding that "the site of the attack has now been cordoned off by the security forces."

This attack occurred on the same day that a round of intra-Afghan peace talks commenced in Qatar between the insurgents and a delegation including members of the Kabul government taking part in an unofficial and personal capacity.

Afghan President Ashraf Ghani condemned the attack in a statement, labelling it a "crime against humanity" that proved them to be the enemy of the people.

"By conducting this terrorist attack, the Taliban showed a paradox in what they are saying and what they are doing. While they are holding talks in Qatar, every day in Afghanistan they are shedding more blood of innocent civilians," Ghani said.

Meanwhile, the Taliban are also holding talks with the US in Qatar. The insurgents have expressed their satisfaction with the advances made in the negotiations, focused on the withdrawal of US troops and the Taliban`s promise that no terror group will attack another country while based on Afghan soil.

However, the ongoing talks have not prevented the Taliban from carrying out brutal attacks such as a suicide bombing against a Defence Ministry facility in Kabul on July 1 that killed 11 people and left 65 injured.