Myanmar security forces have conducted sporadic operations to flush out suspected militants throughout this year, often resulting in casualties among Rohingya villagers. 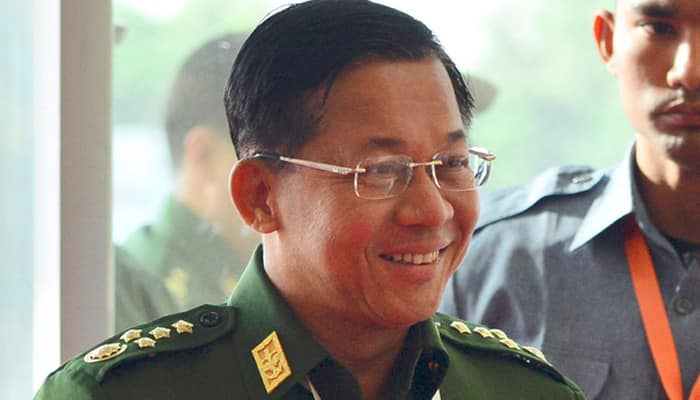 The state is bisected by religious hatred focused on the stateless Rohingya Muslim minority, who are reviled by many Buddhists and perceived as illegal immigrants.
Recent weeks have seen tensions surge with near daily killings by shadowy groups operating in remote villages, while Myanmar`s army has poured more troops into the area.

In the early hours of Friday more than 20 police posts came under attack by an estimated 150 insurgents, some carrying guns and using homemade explosives.
"One soldier and 10 police sacrificed their lives for the country," Commander-in-Chief Min Aung Hlaing said in a statement circulated on Facebook, adding 21 militants also died although others made away with guns.

"Fighting is ongoing at police posts in Kyar Gaung Taung and Nat Chaung villages. The military and police members are fighting back together against extremist Bengali terrorists."

"Bengali terrorists" is the state`s description of the Rohingya militants.

They emerged as a force last October under the banner of the Arakan Rohingya Salvation Army (ARSA), which claims to be leading an insurgency based in the remote May Yu mountain range bordering Bangladesh.

Confirming the unrest an unnamed police officer in Buthidaung town, close to the worst violence, said border posts remained surrounded by militants as day broke in a fluid, dangerous and "complicated situation".

The flare up follows a milestone report on the conditions inside Rakhine by a commission led by former UN chief Kofi Annan.
It urged immediate action to heal the divide including scrapping the restrictions of movement and citizenship imposed on the roughly one million-strong Rohingya community in Rakhine.

The wedge of Rakhine closest to Bangladesh has been in lockdown since October 2016.

Deadly attacks by the militants on border police sparked a military response that left scores dead and forced tens of thousands to flee to Bangladesh.

The UN believes those security `clearances` may have amounted to ethnic cleansing of the Rohingya, a mainly Muslim minority living in Buddhist Myanmar.
The army and Aung San Suu Kyi`s civilian government vehemently deny allegations of widespread abuses including rapes and murders.

Myanmar security forces have conducted sporadic operations to flush out suspected militants throughout this year, often resulting in casualties among Rohingya villagers.

They have spoken of their fear at being trapped in between security forces and the militants, who are accused of conducting a shadowy assassination campaign against perceived collaborators with the state.

Hurricane Harvey strengthens, threatens US with most powerful storm in 12 years