At least 69 Iraqis were killed on Friday and Saturday and hundreds wounded as demonstrators clashed with security forces and militia groups in a second wave of this month`s protests against Prime Minister Adel Abdul Mahdi`s government. 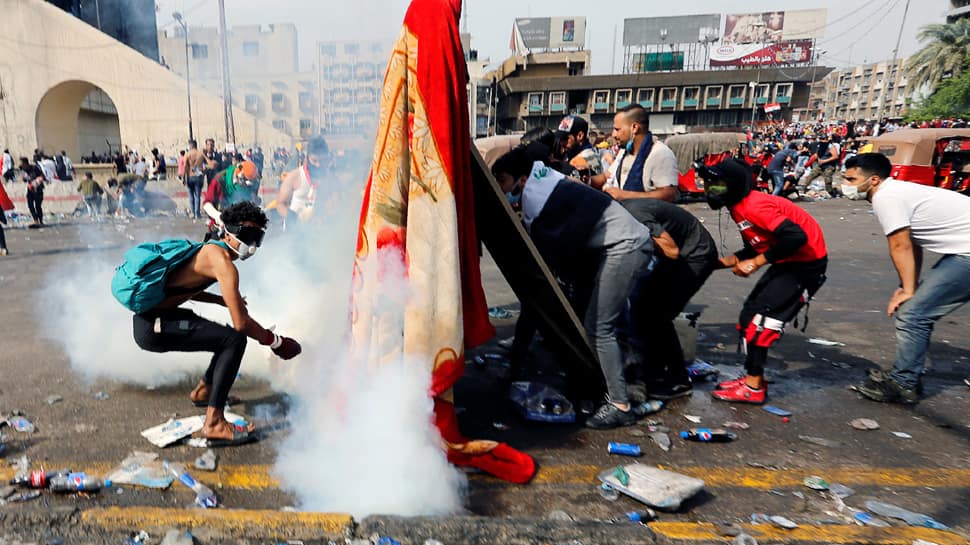 BAGHDAD: Thousands of Iraqi protesters stood fast in Baghdad`s central Tahrir Square on Sunday, defying a bloody crackdown that killed scores over the weekend and an overnight raid by security forces seeking to disperse them. Young men had erected barricades on a bridge leading to the capital`s fortified Green Zone against security forces who continued to lob tear gas canisters towards them. Medical and security sources said 42 people had been injured. "We give you our life and blood, Iraq," they chanted.

At least 69 Iraqis were killed on Friday and Saturday and hundreds wounded as demonstrators clashed with security forces and militia groups in a second wave of this month`s protests against Prime Minister Adel Abdul Mahdi`s government. About 226 people have been killed in October.

Despite the OPEC member country`s vast oil wealth, many Iraqis live in poverty or have limited access to clean water, electricity, basic healthcare and education. Iraq is struggling to recover from years of conflict following the U.S.-led invasion in 2003 that overthrew dictator Saddam Hussein.

Iraqis blame a political elite they say is subservient to one or other of Iraq`s two main allies, the United States and Iran. Many suspect these powers use Iraq as a proxy to pursue their struggle for regional influence, without concern for the needs of ordinary people.

"I ask you Abdul Mahdi, it`s been 16 years and you`ve done nothing. We`re going from bad to worse," said Ma`azir Yas, who had wrapped herself in an Iraqi flag. "This protest is peaceful and the young men only ask for their rights: jobs and services."

Protesters were locked in a cycle on Sunday of advancing deeper into Tahrir Square and towards the Green Zone which houses government buildings, then retreating when the barrage of tear gas canisters became too much.

The smell of the gas was potent in all corners of the square as security forces fired it indiscriminately and directly at protesters, not into the air.
Many used creative ways to defend themselves including one protester who used a satellite dish as a shield. Tuk-tuks swarmed around, carrying injured young men to ambulances.

Young men cleaning up the square said they feared a repeat of Saturday night`s crackdown by security forces, when the demonstrations in Tahrir Square were broken up with tear gas and stun grenades. Some protesters have regrouped.

Iraq`s elite Counter-Terrorism Service said on Sunday it had deployed in the streets of Baghdad to protect important state buildings "from undisciplined elements". Two security sources had told Reuters on Saturday that the Service`s forces in Baghdad had been told to "use all necessary measures" to end the protests against Abdul Mahdi`s government.

Counter-terrorism forces beat and arrested dozens of protesters in the southern city of Nassiriya on Saturday night. The unrest has broken nearly two years of relative stability in Iraq, which from 2003 to 2017 endured a foreign occupation, civil war and an Islamic State insurgency.

It poses the biggest challenge to Abdul Mahdi since he took office just a year ago. Despite promising reforms and ordering a broad cabinet reshuffle, he has so far struggled to address the protesters` complaints. Political alliances backing his fragile coalition government have begun to fracture, making his position precarious.