"Our Intelligence has informed us that the Chinese Government is moving troops to the Border with Hong Kong. Everyone should be calm and safe!" he tweeted. 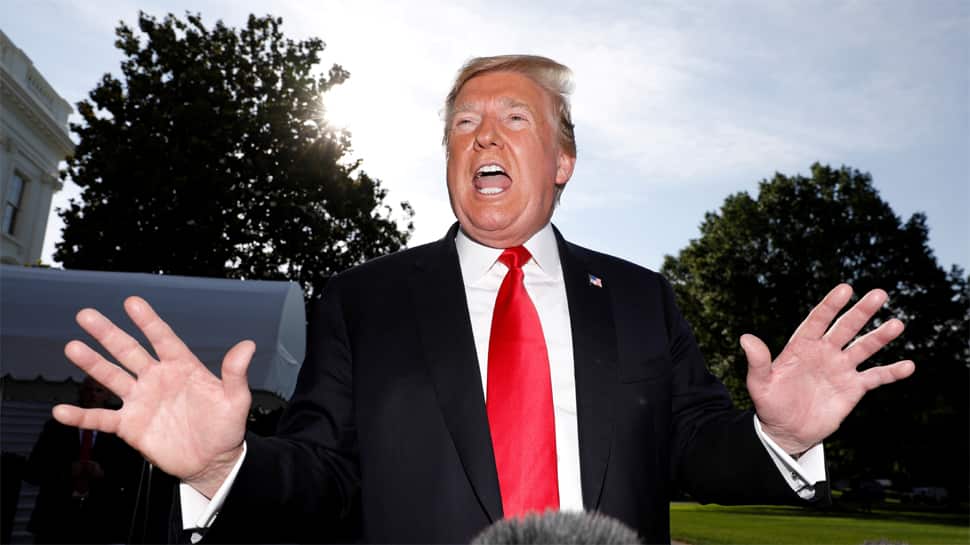 WASHINGTON: US President Donald Trump on Tuesday, citing US intelligence, said China`s government was moving troops to its border with Hong Kong and he urged calm as clashes continued between protesters and authorities in the former British colony. It was not immediately clear if Trump was reporting fresh movements or movements near the border already reported in the media. "Our Intelligence has informed us that the Chinese Government is moving troops to the Border with Hong Kong. Everyone should be calm and safe!" he tweeted.

He said on Tuesday the situation in Hong Kong was tricky, but he hoped it would work out for everybody, including China, and "for liberty" without anyone getting hurt or killed. "The Hong Kong thing is a very tough situation - very tough," Trump told reporters earlier during a visit to Morristown, New Jersey. "We`ll see what happens."

The U.S. State Department, meanwhile, said U.S. Secretary of State Mike Pompeo and top Chinese diplomat Yang Jiechi "had an extended exchange of views on U.S.-China relations" on Tuesday. It did not elaborate. China`s state media reported this week that China has been assembling the People`s Armed Police and conducting exercises in the neighboring Chinese city of Shenzhen, adding to fears that Beijing might directly intervene to quell the protests.

The protests present Chinese President Xi Jinping with one of his biggest challenges, and Hong Kong legal experts say Beijing might be paving the way to use anti-terrorism laws to try to quell the demonstrations. Trump, who has been seeking a major deal to correct trade imbalances with China, drew criticism this month after he described the Hong Kong protests as "riots," and said they were a matter for China and Hong Kong to deal with as the territory was part of China.

U.S. Senate Majority Leader Mitch McConnell warned China on Monday that any violent crackdown on protests in Hong Kong would be "completely unacceptable," while Trump administration officials urged all sides to refrain from violence. On Tuesday, China`s state media said an official with the foreign ministry office in Hong Kong denounced the "arrogance and biases of some U.S. politicians," adding that McConnell`s remarks sent protesters a "seriously mistaken signal."

In a statement later on Tuesday, China`s foreign ministry told Washington to stay out of its internal affairs after some U.S. lawmakers, including House of Representatives Speaker Nancy Pelosi, condemned what they called acts of violence by police against protesters in Hong Kong. Washington has denied Chinese suggestions that it has a hand in the unrest. But Chinese foreign ministry spokeswoman Hua Chunying said the lawmakers` comments "provided new and powerful evidence to the world."

"They have disregarded the facts, turned what`s black into white, and characterized violent crimes as a beautiful fight for human rights and freedom," Hua said in a statement. On Monday, Pelosi, a Democrat, tweeted that she was alarmed to see the Hong Kong police, "with support from Beijing, intensify their use of force against the protesters and label them violent criminals."

Pelosi added, in an apparent reference to Trump`s prioritizing of trade talks with China: "If we don’t speak out for human rights in China because of commercial interests, we lose all moral authority to speak out elsewhere." In his comment to reporters, Trump also said that a phone call between senior Chinese and U.S. trade officials on Tuesday had been very productive and his administration had decided to delay tariffs on some Chinese imports until mid-December to avoid hurting U.S. shoppers heading into the Christmas holiday.

Last week, State Department spokeswoman Morgan Ortagus called China a "thuggish regime" for disclosing photographs and personal details of a U.S. diplomat who met with Hong Kong`s student leaders. On Friday, she said the reports had "gone from irresponsible to dangerous" and must stop.

On Monday, the State Department repeated calls for Beijing to adhere to its commitments after its 1997 handover from British rule to allow Hong Kong a high degree of autonomy and said it was important to respect freedoms of speech and assembly.