The operation dubbed Peace Spring by the Turkish government began Wednesday at around 4 pm local time with air raids and shelling while a ground offensive, involving Turkish soldiers and allied Syrian rebels, began at 11.30 pm. 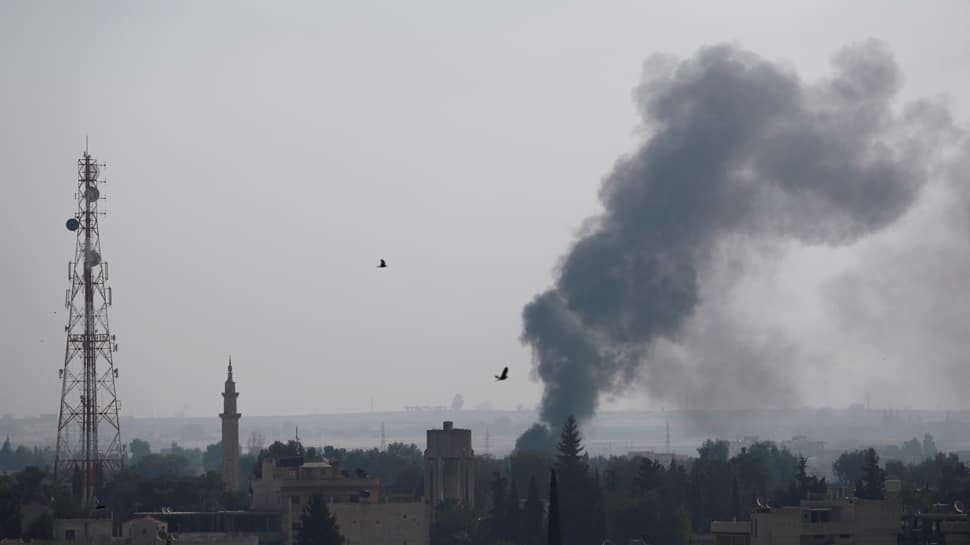 ANKARA: Turkish Presiden Recep Tayyip Erdogan warned the European Union (EU) that he would let millions of Syrian refugees cross into the bloc if it criticised the military operations as the Turkish offensive in Syria, launched by him aimed at pushing the Kurdish forces away from its border, entered its second day on Thursday.

Erdogan also claimed the Turkish army had killed 109 Kurdish fighters on the first day of the country`s invasion of northern Syria. The operation dubbed Peace Spring by the Turkish government began Wednesday at around 4 pm local time with air raids and shelling while a ground offensive, involving Turkish soldiers and allied Syrian rebels, began at 11.30 pm., Efe news reported.

Addressing his AKP party, Erdogan said Turkish troops had killed 109 "terrorists" and had captured several YPG fighters. The YPG, a Kurdish militia known officially as the People`s Protection Units, had been a key United States ally in the fight against the Islamic State in northern Syria but Ankara views them as indistinguishable from its more habitual enemies, the Kurdistan`s Workers Party (PKK), which has fought a decades-long insurgency in southeast Turkey.

The Turkish government refers to the YPG as a terror group. "We will bring peace and security to wherever we want to go," Erdogan told party members in a televised speech.

"The operation continues in the region of Tal Abyad and Ras al-Ayn," he added, in reference to two of the cities where the Turkish forces began their operations on Wednesday.

The military invasion of northern Syria, which came after United States President Donald Trump decided to withdraw American troops from the region, has been met with criticism.

Erdogan reacted to this with a pointed threatening to the EU: "I say it again. If you try to label this operation as an invasion, it`s very simple, we will open the gates and send 3.6 million refugees your way."

Turkish authorities want the "safe zone" to extend 32 km into northern Syria, stretching from the Euphrates River to the Iraqi border. As well as using the area to re-home some of the roughly four million Syrian refugees in Turkey, the government wants to avoid the creation of a Kurdish statelet along its border.

Erdogan accused Brussels of not upholding its end of a financial deal that in 2016 destined funds to Ankara in exchange for Turkey controlling the flow of migrants into Europe.

Turkish forces on Thursday were shelling several YPG positions near Tal Aybad and conducted airstrikes near Qamishli, which is on the border. Both the YPG and Turkey blamed each other for a civilian death in the city on Wednesday.

Within the umbrella organization, the Syrian Democratic Forces, the YPG spear-headed the US-backed ground offensive against the IS in the region, liberating cities such as Raqqa.

Ankara fears that a de facto Kurdish entity backing onto its border could be used by the PKK to launch attacks into Turkey. The SDF said late Wednesday that eight people, including five civilians, had been killed by the Turkish military operation.

Turkish soldiers are joined on the ground by members of the Free Syrian Army ? recently rebranded as the Syrian National Army. The Syrian militia, which has fought alongside Turkish forces on two previous incursions, was originally formed to fight the regime of President Bashar Al Assad.

Erdogan told Trump that Turkey was willing to take custody of the tens of thousands of IS prisoners held in northern Syria. Trump took criticism from Democrats and Republicans alike for dropping support for the Kurds and tried to backtrack slightly, announcing he would devastate Turkey`s economy if Erdogan "wiped out the Kurds".

On Wednesday Trump defended his decision saying the Kurds "didn`t help us in the Second World War, they didn`t help us with Normandy". Turkey`s invasion of the region has been denounced by several countries, including the United Kingdom, France, the Netherlands, Canada and Germany as well as regional powers including Saudi Arabia, the United Arab Emirates, Jordan, Egypt and Lebanon.

As Biden calls for impeachment, Trump adds legal muscle, lashes out at whistleblower