Crews lost ground on Sunday against a wind-driven wildfire that has blackened a wide swath of California`s picturesque wine country and driven 180,000 people from their homes as they hoped for a break in the hot, dry weather. 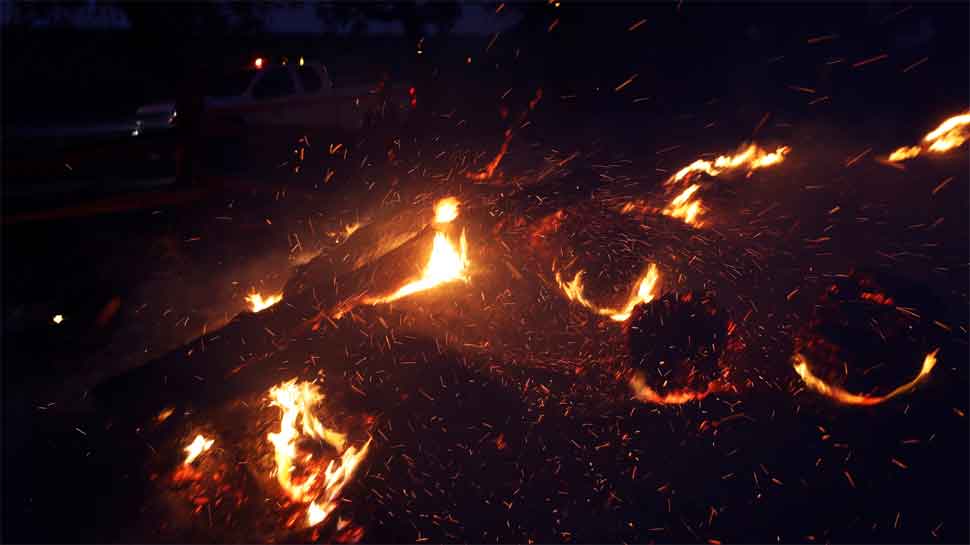 HEALDSBURG: Crews lost ground on Sunday against a wind-driven wildfire that has blackened a wide swath of California`s picturesque wine country and driven 180,000 people from their homes as they hoped for a break in the hot, dry weather.

About 3,000 people were battling the Kinkade Fire, the worst of more than a dozen major blazes that have damaged or destroyed nearly 400 structures, and prompted Governor Gavin Newsom to declare a statewide emergency.

"All hands are focusing on the Kincade," Newsom told reporters after meeting residents at an evacuation center in the Sonoma County city of Petaluma, calling that blaze "the most stubborn challenge we face."

Newsom said its containment had "slipped" to about half of an earlier estimate of 10 percent, with more than 50,000 acres (20,230 hectares) burned, as nearly 90-mph (145-kph) gusts whipped flames toward communities as far south as northern Santa Rosa.

About 180,000 people were under mandatory evacuation orders, including the towns of Healdsburg and Windsor, north of Santa Rosa, which stand in the path of the flames. The Kincade, which has ravaged nearly 80 sq miles (207 sq km) of wine country, has burned down 79 structures since it broke out on Wednesday but no casualties have been reported.

Investigators have not yet said what they believed caused the blaze, although it ignited near a broken wire on a Pacific Gas & Electric transmission tower.

High wind forecasts prompted utility Pacific Gas & Electric Corp on Saturday night to shut off power to about 940,000 customers in 43 counties to guard against the risk of touching off wildfires. The utility said the protective blackouts could last two days.

The governor has been sharply critical of PG&E, saying corporate greed and mismanagement kept it from upgrading its infrastructure while wildfire hazards have steadily worsened over the past decade.
PG&E, which filed for bankruptcy in January, citing billions of dollars in civil liabilities from deadly wildfires sparked by its equipment in 2017 and 2018, says it has since remedied problems experienced with its website and customer call center.

Newsom said firefighters were making their stand at U.S. Route 101 near Windsor as they waited for relief from hot, dry winds forecast to subside significantly on Monday. No major wildfires have burned west of the 101 in that part of the state since the 1940s, said Steve Volmer, chief fire behavior analyst at the California Department of Forestry and Fire Protection (Cal Fire).

"The fuels in that area are extremely dense, they’re extremely old and...they’re extremely dry," Volmer told Reuters in an interview. Newsom said crews had largely "gotten their arms around" the Tick Fire near the city of Santa Clarita, about 35 miles (56 km) north of downtown Los Angeles, which has charred 4,615 acres (1,868 hectares) and destroyed 22 structures, since Thursday.

Most of the more than 40,000 residents ordered to evacuate were allowed to return home by Saturday afternoon, the county fire department said.