When the Chinese anthem was played out - China has been administrating Hong Kong under the 'one country, two systems' since 1997, people booed from the stands. Many of them also began chanting 'Glory to Hong Kong', a de facto anthem in Hong Kong. 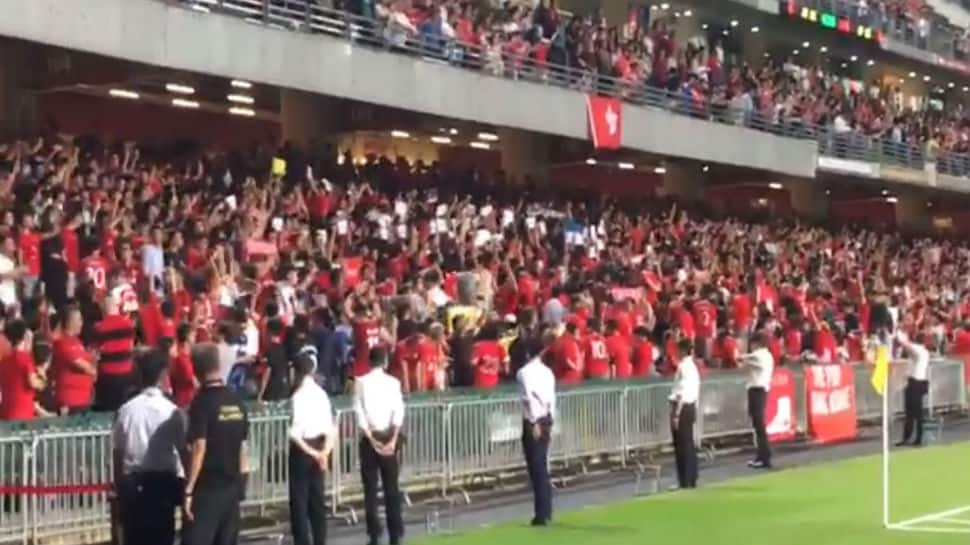 Protests in Hong Kong against China have entered the football field and in full view of the international community. Football fans in Hong Kong on Tuesday loudly booed the Chinese national anthem before the start of the World Cup qualifier between their team and the team from Iran.

Hong Kong has been on the boil for the past three months with people here demanding China to completely withdraw an extremely unpopular extradition bill which, among other provisions, would allow for fugitives to be sent to mainland China for their trials. While Beijing officially withdrew the bill on September 3, protestors have not backed down from their other demands which include probing alleged police atrocities on locals who have participated in protests over the past several weeks.

While the protests have hit Hong Kong's economy and tourism sector extremely hard, Tuesday saw the anger spill over to the football pitch. South China Morning Post reported that hundreds of people came for the match wearing red - the colour of Hong Kong's official football jersey. When the Chinese anthem was played out - China has been administrating Hong Kong under the 'one country, two systems' since 1997, people booed from the stands. Many of them also began chanting 'Glory to Hong Kong', a de facto anthem in Hong Kong, according to South China Morning Post. Then there were 'Long Live Hong Kong' and 'We are Hong Kong' chants as well. Most also kept their phones held up high with the flash on in a mark of protest.

Some #HongKong ???? #football fans ferociously booed #China’s national anthem before the @FIFAWorldCup qualifier against Iran ???? at #HK Stadium. The HKFA had been fined becuz of similar incidents in the past. Video by my colleague Atom Cheung #HongKongProtests pic.twitter.com/ku86v9R0sS

China had passed a law in September of 2017 which had made it an offence to disrespect the country's national anthem but it cannot be implemented in Hong Kong until passed by the legislation in the city, according to South China Morning Post.