The revelation about North Korea's Hwaseong-15 missile was made in the USFK 2019 Strategic Digest, published jointly with United Nations Command and Combined Forces Command.

North Korea has a missile which can hit targets anywhere in the United States of America's mainland. According to United States Forces Korea (USFK), North Korea's Hwaseong-15 (or Hwasong-15) road-mobile, intercontinental ballistic missile (ICBM) has an estimated range of 8,000 miles (12,875 kilometres) and is capable of striking any part of the continental United States.

The revelation about North Korea's Hwaseong-15 missile was made in the USFK 2019 Strategic Digest, published jointly with United Nations Command and Combined Forces Command. 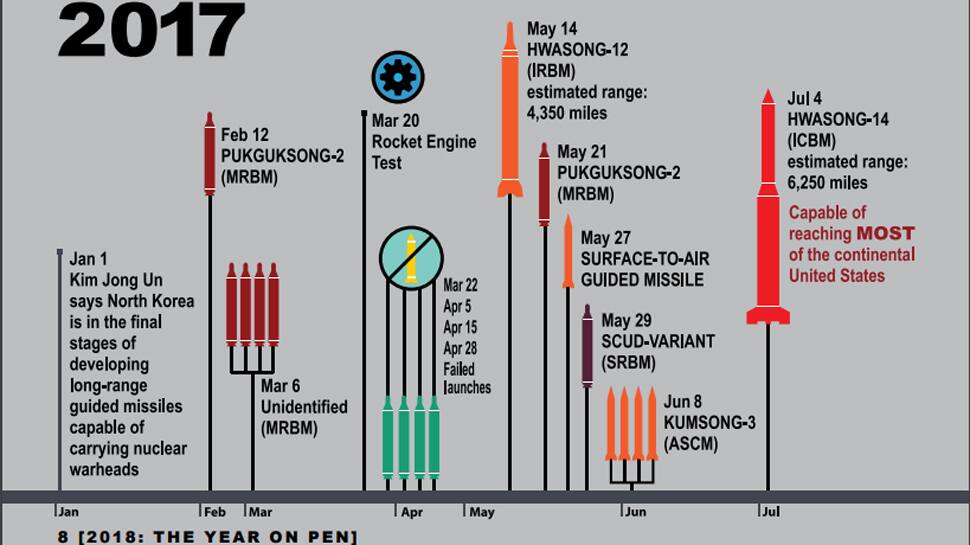 North Korea had claimed that the Hwaseong-15 missile was successfully test-fired on November 29, 2017. While the Korean Central News Agency (KCNA) had reported that Hwaseong-15 achieved an altitude of 4,475 km and flew a linear distance of 950 km before it struck a dummy target, there was no mention of the kind and weight of payload it was capable of carrying.

A missile's range is affected by the payload size and Hwaseong-15's complete capabilities would not be known unless the kind of warhead it can carry is clarified.

According to the KCNA Hwaseong-15 is an ICBM which can carry a super-large heavy warhead and offers "greater advantages in its tactical and technological specifications and technical characteristics than Hwaseong-14, which has a range of 6,250 miles (10,058 km). The USFK admits that even the Hwaseong-14 ICBM is capable of reaching most of the continental United States.

However, the USFK 2019 Strategic Digest also mentions that North Korea shifted away from the overtly hostile acts towards South Korea and the US that dominated its actions in 2017. North Korean leader Kim Jong Un participated in summits with South Korean President Moon Jae-in and US President Donald Trump in 2018.

A US Defense Intelligence Agency report to the US Congress in 2017 that the North Korean Army has more than 1 million soldiers, making it the world’s fourth-largest military. Six per cent of North Korea’s 25 million people serve on active duty, and another 25 to 30 per cent are assigned to a reserve or paramilitary unit.

About 70 per cent of North Korea’s ground forces and 50 per cent of its air and naval forces are deployed within approximately 60 miles of the Demilitarised Zone (DMZ).