US south 'still under the gun' after deadly storms

More than 30 tornadoes struck on Monday and Tuesday from Texas, Oklahoma and across the southern plains into Missouri, said meteorologists with the National Weather Service. 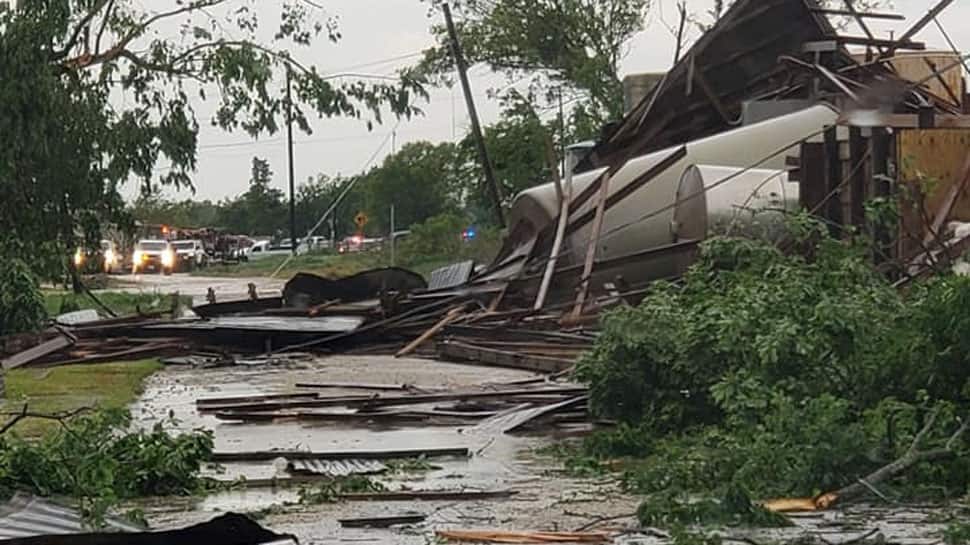 A storm system that blasted the U.S. South was weakening on Tuesday but another was on its way after thunderstorms and tornadoes left a swath of destruction, killed at least two people and tore up a NASCAR grandstand. More than 30 tornadoes struck on Monday and Tuesday from Texas, Oklahoma and across the southern plains into Missouri, said meteorologists with the National Weather Service.

While this weakening storm system is expected to roll into the Great Lakes region early Wednesday, another system is brewing Wednesday night into Thursday, said Brian Hurley, a forecaster with the NWS Weather Prediction Center. "The Southern Plains can`t catch a break," Hurley said. "More storms will develop overnight into Thursday morning."

Rainfalls are predicted to be about 2 inches across eastern Kansas, Oklahoma, and into western Missouri, with localized spots getting up to 5 inches, he said. "That whole area is still under the gun," Hurley said.

In Wheatland, Missouri, at the Lucas Oil Speedway, a reported tornado injured 7 people, flipped over cars, toppled campers and damaged the grandstands, with local media images showing piles of twisted metal and upside down vehicles.

The Memorial Day weekend "Lucas Oil Show-Me 100" races at the speedway, about 120 miles southeast of Kansas City, were canceled indefinitely. A crowd topping 3,000 fans of the National Association for Stock Car Auto Racing (NASCAR) had been expected, track officials said on Tuesday.

Two deaths from a traffic accident on a rain slicked Missouri highway were reported by police late Monday. Missouri Gov. Mike Parson declared a state of emergency on Tuesday for the state, out of concern for floods from cresting rivers and streams, with forecasts of more rain on the way.

Forecasters said the Missouri River is expected to crest on Thursday at more than 32 feet at the state capital of Jefferson City. Local media including NBC News said that is two feet higher than the city`s levees.