A three-cylinder 1.2L TiVCT petrol engine is being introduced for the first time in the New Figo.

New Delhi: Ford launched the Figo in a refreshing avatar in India on Friday with stylish exterior and interior and redesigned with more than 1,200 new parts.

Here are the Variant-wise prices: 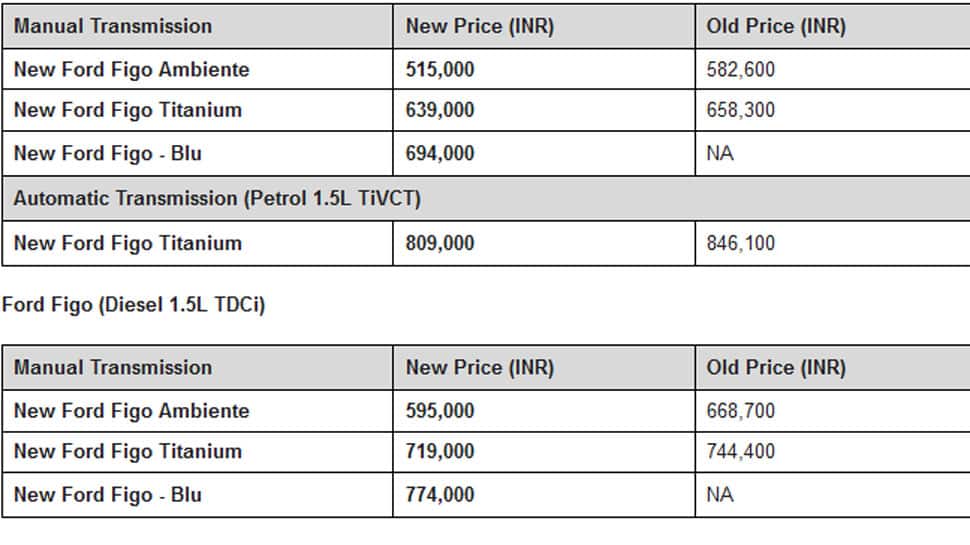 A three-cylinder 1.2L TiVCT petrol engine is being introduced for the first time in the New Figo. The engine generates 96 PS of peak power and 120 Nm of torque while delivering fuel efficiency of 20.4 KM/L, The company said.

Both engines in the New Figo will be paired with a sportier five-speed manual transmission. The New Ford Figo will also be offered with a six-speed Automatic Transmission. Paired to the latest 1.5L Petrol, three-cylinder engine, the Automatic Figo will deliver a peak power of 123 PS and fuel economy of 16.3 KM/L. All three engines will be the most powerful in their respective categories.

The new Figo will have a redesigned front fascia, fog lamps will be integrated into the front bumper and will come with a chrome and Blue touch, depending on the trim, headlamps with a black encasing.

The new Figo will come equipped with a 7-inch homegrown infotainment system with touchscreen and built-in navigation.