New Delhi: Bhumi Pednekar, who jetted off to Lucknow on Sunday, has started shooting for next film 'Pati Patni Aur Woh'.

The actor, who will be seen sharing screen space with Kartik Aaryan and Ananya Panday, shared a picture of the clapper board on her Instagram story and wrote, "And we start...Pati Patni Aur Woh." 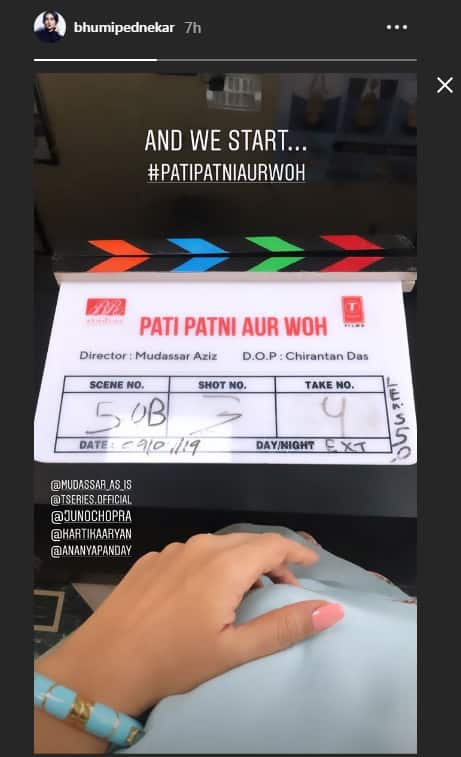 Giving a sneak peek of her preparations for the film, the actor on Monday shared a picture of the film script on her Instagram story and wrote, "All prepped and ready...Pati Patni Aur Who...shoots starts tomorrow."

Meanwhile, the other two members of the cast seem to join the actor later for shooting.

It will be the first time that Bhumi and Kartik will be seen together on screen.

'Pati Patni Aur Woh' is a remake of a 1978 film with the same title and is being directed by Mudassar Aziz of 'Dulha Mil Gaya', 'Happy Bhag Jayegi' and 'Happy Phirr Bhag Jayegi' fame.

The original film revolved around a married couple Ranjeet (Sanjeev) and Sharda (Vidya) and how things get changed after he gets involved with his secretary Nirmala (Ranjeeta).

The film is slated to hit the big screens on December 6.

Apart from 'Pati Patni Aur Woh', Bhumi will be seen next in 'Saand Ki Aankh' and 'Bala' while Kartik will feature next in Imtiaz Ali directorial film alongside Sara Ali Khan.