Written and directed by Sandeep Vanga, Kabir Singh continues to dominate the Box Office and is all set to touch the 250 crore mark.

New Delhi: Despite being in the third week of its release, Shahid Kapoor and Kiara Advani starrer 'Kabir Singh' continues to dominate the Box Office. The film has collected over Rs 200 crore in the first week of its release and is inching towards the coveted Rs 250 crore mark.

The film has emerged as one of the most successful films of the year. As per the latest reports, it has become the tenth highest-grossing film in the Hindi film industry and is all set to surpass the collection of Vicky Kaushal starrer 'Uri: The Surgical Strike'.

Noted trade analyst Taran Adarsh shared the latest business collection of the film in a series of tweets:

"While #KabirSingh is all set to surpass the *lifetime biz* of #Uri today [Wed], let’s have a look at the *10 highest grossing films* in #Hindi... #KabirSingh holds the No 10 rank, while #Uri moves to the 11th position... List follows..."

'Kabir Singh' is an official Hindi remake of the 2017 Telugu blockbuster 'Arjun Reddy' which featured Vivek Devarakonda as lead. It is helmed by Sandeep Vanga who directed the original. Shahid is said to have delivered his career-best performance in the film. 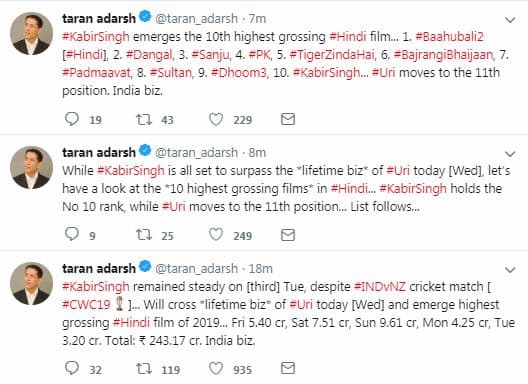 It tells the story of a hot-headed surgeon who goes on a self-destruction path after his girlfriend marries someone else.