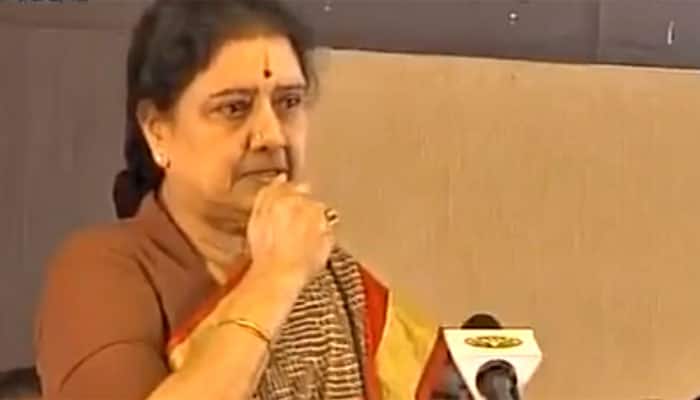 Chennai: AIADMK general secretary VK Sasikala Natarajan, who is locked in a bitter power struggle with her party colleague and chief minister O Panneerselvam, has now revealed what were the last words of her close companion and state's former chief minister J Jayalalithaa.

Addressing AIADMK MLAS at the Golden Bay Resort in Koovathur near Mahabalipuram on Sunday evening, Sasikala had urged them to take a pledge in front of portrait of late Tamil Nadu chief minister J Jayalalithaa that they will 'help the party capture the secretariat.'

A Times of India report on Monday quoted Sasikala as claiming that Jayalalithaa's last words to her were "No one can destroy our party."

The AIADMK general secretary, in return, said that she would do everything to save the party.

An emotionally-charged Sasikala then said, “I am going to take a pledge in front of Amma's portrait that we will capture the secretariat. Everyone should take the pledge with me."

A little later, Sasikala said, "Everyone should take the pledge at former CM J Jayalalithaa's memorial on Marina Beach  and then capture the secretariat."

"Amma has left behind the party as our wealth. We will take it," she added.

In her speech, the AIADMK general secretary also talked about the education of AIADMK legislators.

"You are not highly educated, but Amma was. Despite that, she trained you so that you could dream of one day becoming an MLA. Don't forget what she did. How she raised you up from your humble origins," she said.

Sasikala also tried to win the support of her MLAs saying, "With your support I will face anything. I have the courage. I will not step back from any decisions taken. I will take the right decisions at the right time. I will not back off."

She blamed the opposition for fomenting trouble in the ruling party and scuttling her chances to become the chief minister as she was a woman .

"They say, she is a woman we can threaten her. That didn't work with Amma. It won't work with me. There are so many people in our party that - only I can capture the secretariat. We will not - cow down. We will stand united," she added.