Man of the Match Rohit Sharma led the attack for India on Sunday smashing his 24th ODI century and adding 140 runs off 113 balls to the scorecard. 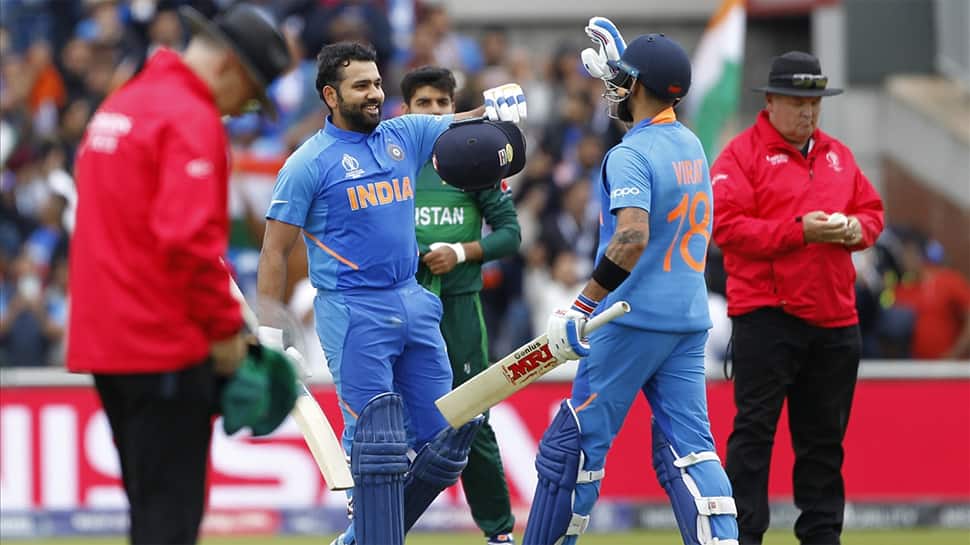 A feisty hundred by Rohit Sharma backed by the formidable bowlers ensured an easy win for India in the ICC World Cup 2019 clash against arch-rivals Pakistan at the Old Trafford Cricket Ground in Manchester on Sunday. Despite being hit by frequent rain interruptions, India had an upper hand throughout the game and thrashed Pakistan by 89 runs via Duckworth-Lewis-Stern Method (DLS).

By winning the match, India maintained their spotless World Cup record against Pakistan - defeating them in all of the seven matches where the two teams have faced each other over the years in the marquee competition.

Man of the Match Rohit Sharma led the attack for India smashing his 24th ODI century and adding 140 runs off 113 balls to the scorecard. His knock coupled with KL Rahul and Virat Kohli's 50s helped India set a target of 336 for 5 - their highest total against Pakistan across seven World Cup matches. While Rohit dominated the first innings, the second innings belonged to Kuldeep Yadav, who removed set batsmen Fakhar Zaman (62) and Babar Azam (48) in successive overs to and ended their 104 run-stand. From 117 for 1, Pakistan slumped to 129 for 5 in no time. At 166 for 6 in 35 overs, rain intervened for the third time, and with another hour lost, the revised equation for Pakistan was to score 302 runs from 40 overs, meaning they needed to knock off a mind-boggling 136 runs from five overs.

Here is a look back at the previous six instances when India defeated Pakistan in World Cup clashes.

India and Pakistan met for the first time in a World Cup in the 1992 Benson & Hedges World Cup. Imran Khan and Aaqib Javed had tied down India despite some solid batting from Mohammad Azharuddin and Ajay Jadeja. It was left to Kapil Dev and a young Sachin Tendulkar to provide the innings some impetus. They scored 60 in eight overs, with Kapil racing to a 26-ball 35, while Tendulkar helped himself to his first World Cup half-century.

Defending 216, Kapil and Manoj Prabhakar reduced Pakistan to 17/2. Javed Miandad and Aamir Sohail rebuilt sluggishly to take the score to 85/2 in 25 overs. With Tendulkar dismissing Sohail and Azhar astutely bringing Prabhakar back to get rid of Saleem Malik, the Pakistani challenge fizzled out. By the time Miandad was yorked by Javagal Srinath, the game was as good as over.

In 1996, India and Pakistan met in the World Cup quarterfinal, a match that Wasim Akram oddly opted out of. Navjot Sidhu top-scored with 93, and coupled with Jadeja’s stunning assault on Waqar Younis (his last two overs cost 40), India reached a strong 287 for 8. In reply, Sohail and Saeed Anwar got Pakistan off the blocks and thumped 84 off the first ten overs. Sohail then infamously taunted Venkatesh Prasad after smashing him for four through the covers only to have his off stump rattled next ball. Miandad tried but Pakistan never recovered, meaning their reign as World Champions and Miandad’s three-decade-long career was over.

Shortly after a two-Test series in early 1999, India and Pakistan engaged in the Kargil war, and in between the war, the two cricket teams did battle for a third time at a World Cup. Tendulkar and Rahul Dravid added 58 runs for the second wicket to get India a busy start. Azharuddin and Dravid put on another 51 for the next wicket with both batsmen scoring half-centuries to get India 227 for 6. Prasad and Srinath rattled Pakistan’s top-order and Despite Anwar’s gritty 36 off 44 and Inzamam Ul Haq’s enduring 41 off 93, India bowled Pakistan out for 180 and won the match by 47 runs with Prasad finishing with 5/27 which remained his career-best figures.

India and Pakistan played out perhaps the best match of the World Cup 2003. In their first one-day international meeting since June 2000, Anwar’s century lifted Pakistan to 273. In reply, Tendulkar led an assault that would find a special place in the greatest one-day innings of all time, let alone a World Cup. With Virender Sehwag, Tendulkar launched a relentless assault, including an 18-run over belted off Shoaib Akhtar. Nerves keeping him awake the night before the match, Tendulkar sizzled with a 75-ball 98. Akhtar returned to remove Tendulkar later, who was bogged down by cramps but Dravid and Yuvraj Singh finished off the match coolly to hand India their fourth consecutive World Cup win over Pakistan.

Eight years after his destructive knock in Centurion, Tendulkar was once again in the centre of action. Leading a charmed life, Tendulkar was relieved twice by the third umpire on 23 and dropped on 27, 45, 70. Wahab Riaz removed Virat Kohli and bowled Yuvraj for a duck courtesy a vicious inswinger, but Suresh Raina's 39-ball 36 gave India 260. Pakistan’s muddled approach to chasing under lights ultimately helped the home team extend their World Cup record against their arch-rivals to 5-0. Pakistan veterans Younis Khan and Misbah Ul Haq’s go-slow tactics put pressure on the younger players as India’s bowlers tightened the screws. MS Dhoni admitted after the match that he had misread the pitch and erred in omitting R Ashwin for Ashish Nehra, but the move proved a masterstroke as the left-arm pacer took 2/33 in ten overs.

A century from Kohli in India’s opening match of the 2015 World Cup gave the team a total of 300/7. Kohli and Shikhar Dhawan stitched a 129-run stand for the second wicket before the pair of Kohli and Raina added another 110. Sohail Khan picked up a five-wicket-haul and his regular blows kept India at least 30 runs short. Pakistan. Ahmed Shehzad and Haris Sohail kept Pakistan alive with a steady 68-run stand for the second wicket but once both were dismissed, it all went downhill for Pakistan. Misbah remained unbeaten till the end but it was yet another slowish innings considering the steep target. Shami emerged India’s best bowler on the night picking up 4/35.