Australia defeated Pakistan by an innings and five runs on day four of the first Test match here at the Gabba. 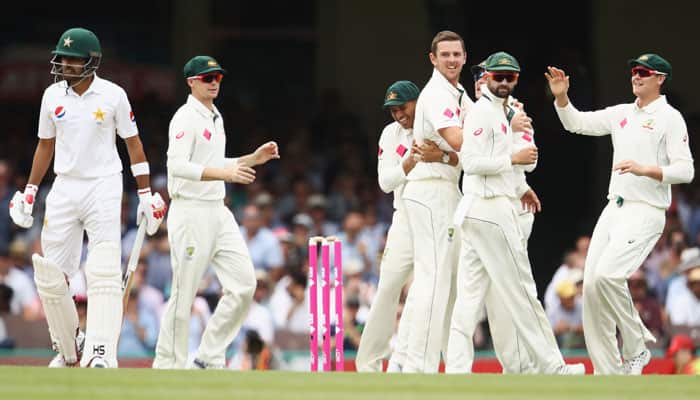 Australia defeated Pakistan by an innings and five runs on day four of the first Test match here at the Gabba.

With this win, Australia has moved to second place in the World Test Championship (WTC) standings with 116 points.

Resuming day four at 64/3, Pakistan was able to add just 29 runs more before the falling of the fourth wicket.

Mohammad Rizwan and Babar Azam then joined each other at the crease and they kept Australian bowlers at bay with their 132-run stand. Their partnership saw Azam bringing up his second Test ton.

Australia was finally able to get the breakthrough in the 64th over as Nathan Lyon dismissed Azam (104), reducing Pakistan to 226/6.

Yasir Shah then came out to the middle and he along with Rizwan ensured that the scoreboard keeps ticking at a rapid pace. Both batsmen put up a stand of 79 runs.

Rizwan missed out on his century as he was dismissed on 95 by Josh Hazelwood, reducing Pakistan to 305/7, still trailing Australia by 35 runs.

Shah (42) was sent back to the pavilion by Josh Hazelwood in the 82nd over to leave Pakistan at 324/8, still trailing the hosts by 16 runs.

Pakistan`s last two wickets also fell cheaply and as a result, Australia won the match by an innings and five runs.The visitors were bowled out for 335 in the final innings.

Hazelwood scalped four wickets for the hosts.Both sides will now take on each other in a day-night Test slated to begin from November 29 at Adelaide.

India vs Bangladesh, Pink Ball Test Day 3: As it happened