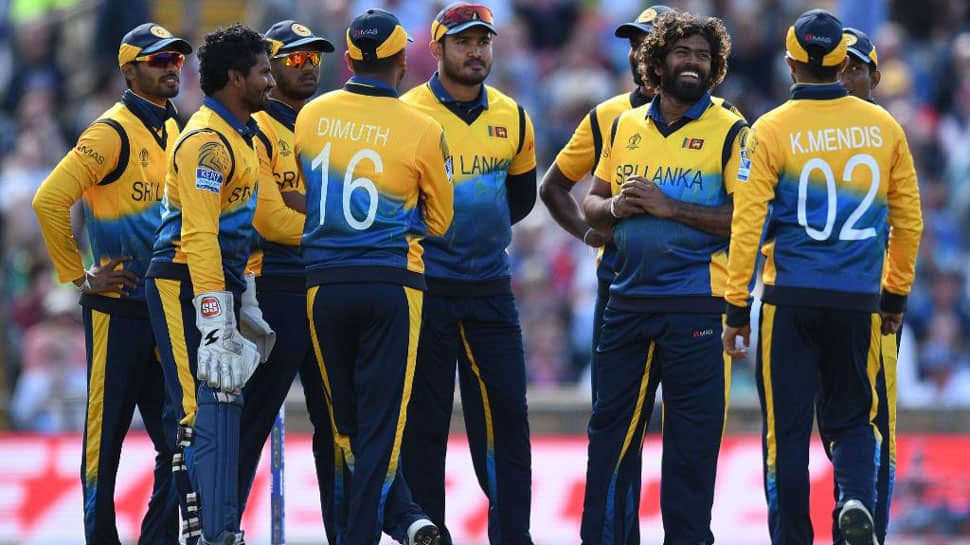 Lasith Malinga starred with a four-wicket haul as Sri Lanka stunned pre-tournament favourites England by 20 runs in a thrilling World Cup game at the Headingley Cricket Ground on Friday.

For England, Ben Stokes remained not out on 82 off 89 balls, his fighting innings laced with seven fours and four sixes, as he tried hard to stage a miraculous comeback with No. 11 Mark Wood (0). However, the side fell short as Wood nicked Nuwan Pradeep (1/38) to the wicketkeeper in the 47th over.

England were 186/9 with 47 runs still to get when Wood joined Stokes in the middle. Stokes did brilliantly well to not expose him in Malinga`s last over and then smashed Udana for two consecutive sixes in the 46th over to hit two back-to-back fours off Pradeep in the next over.

Trusting Wood to block the last ball of the over, Stokes took a single but as it turned out, the fast bowler could not stop the Lankan surge as the 1996 champions erupted in joy.

With the victory, Sri Lanka moved to the fifth place with six points from six games while England remained third with eight in their kitty from six outings.

Chasing a modest 233 for victory, England kept losing wickets at regular intervals from the beginning with Malinga creating havoc and keeping the Lankans in the game.

Jonny Bairstow was trapped in front for a golden duck in only the second ball of the innings, with fellow opener James Vince (14) also failing to make an impact with Malinga dismissing him caught behind.

Reduced to 26/2 inside the first seven overs, Root and skipper Eoin Morgan tried to steady the ship with a 47-run stand but Isuru Udana took a stunning return catch off his own bowling to send England`s hero in the last match back for 21.

The big moment of the game came in the 31st over when Malinga dismissed Root with a caught behind which was confirmed after Sri Lanka asked for a review.

Root, who was expected to anchor England`s chase, looked to guide the ball down to fine leg but got a faint edge, as reviews showed, to wicketkeeper Kusal Perera.

Jos Buttler (10) did not last long, getting out leg before wicket to Malinga as England were in all sorts of trouble after de Silva scalped the two wickets of Chris Woakes (2) and Adil Rashid (1) in the 41st over to swing the tide in their favour.

It was all downhill from there before Stokes almost did the jugular but fell short in the end. Earlier, Wood and Joffra Archer attacked in a pair as England restricted Sri Lanka to 232/9 in 50 overs.

Both pacers picked three wickets each and while Archer gave away 52 runs in his 10 overs, Wood bowled 8 and conceded 40.

For Sri Lanka, Angelo Mathews top-scored with an unbeaten 85 off 115 balls. Sri Lanka never really got going in the innings. They lost their first wicket in the second over of the innings, bowled by Archer.

Sri Lanka found themselves at 3/2 early on during the innings after the quick dismissals of Captain Dimuth Karunaratne and opener Kusal Perera. Sri Lanka then managed to not lose any more wickets in the first 10 overs with Avishka Fernando looking in control.

Fernando hit six fours and two sixes before a loose shot off Wood in the 13th over went straight to Adil Rashid at third man and he had to walk.

Angelo Mathews and Kusal Mendis then laboured on with a 71-run stand for the fourth wicket. However, Rashid then struck with twin dismissals, accounting for Kusal and Jeevan Mendis off consecutive balls and Sri Lanka found themselves tottering at 133/5 at the 30-over mark.

Mathews then got steady assistance from de Silva which ensured that Sri Lanka crossed the 200-run mark. Archer and Wood further ran through the lower-order and ensured that the mighty England batting line-up had to chase a target below 240.