Bumrah's five-wicket haul not only saw him become the fastest bowler to take 50 Test wickets but also helped him break into the top 10 of the ICC Test rankings for the first time. 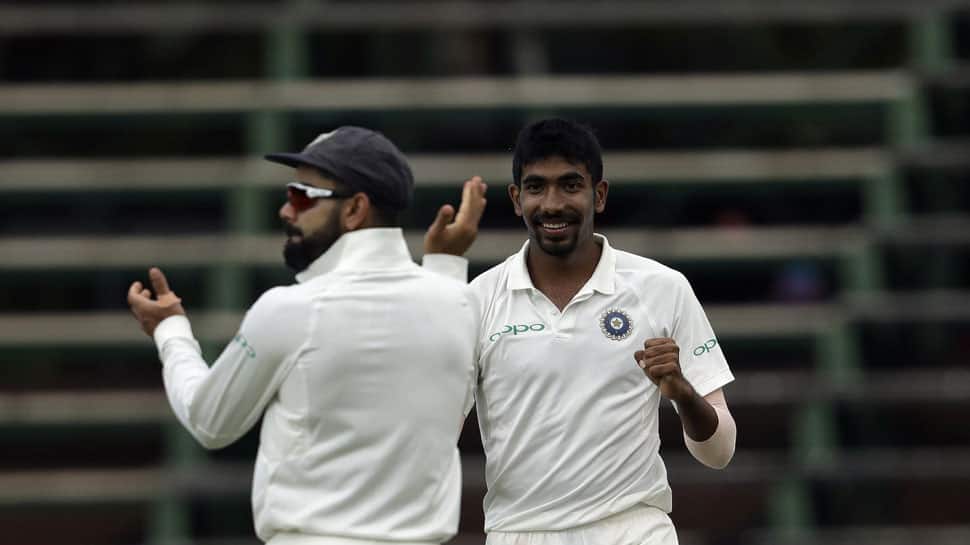 Indian fast bowler Jasprit Bumrah on Tuesday broke into the top ten of the International Cricket Council (ICC) Test rankings for bowlers after grabbing a five-wicket haul during the opening Test of the two-match series against West Indies at the Sir Vivian Richards Stadium in Antigua.

Bumrah delivered a memorable eight-over spell in which he claimed five wickets while conceding just seven runs to help India bundle out West Indies for 100 runs in their chase of the 419-run target. As a result, the Virat Kohli-led team secured a massive 318-run win over the Caribbean side to take an unassailable 1-0 lead.

The five-wicket haul not only saw Bumrah become the fastest bowler to take 50 Test wickets but also saw him break into the top 10 for the first time. His previous best was 15th position in January this year.

Mohammed Shami, who finished with a total of four wickets in Antigua Test, moved up two places to occupy 19th place. Ishant Sharma has also climbed up four places to grab 21st position in the updated Test rankings for bowlers.

Meanwhile, India vice-captain Ajinkya Rahane, who got scores of 81 and 102 in a player of the match effort, has moved from 21st to 11th position in the list for batsmen led by captain Virat Kohli and with another compatriot Cheteshwar Pujara occupying the fourth position.

For the West Indies, Kemar Roach’s haul of five wickets has helped him move from 11th to the eighth position among bowlers while Roston Chase has gone up from 45th to 38th. Holder has moved from 37th to 34th among batsmen in the latest rankings update, which also takes into account the third Ashes Test between Australia and England and the second of two Tests between Sri Lanka and New Zealand in Colombo.

England all-rounder Ben Stokes’s stupendous effort in the third Test against Australia at Headingly has helped him reach career-best position among batsmen and all-rounders in the International Cricket Council (ICC) Test Player Rankings.

Stokes, who scored a match-winning unbeaten knock of 135 in the second innings to guide England to an epic series-leveling one-wicket win and also took four important wickets, has advanced 13 slots to occupy career-best 13th place in the batting rankings. He had a previous best of 19th position in October 2017.

Stokes has also moved up two places to grab the second position among all-rounders for the first time in his career, having occupied third position in September 2017. He has gained a handsome 44 points after the Headingly effort and is now on 411 points, only 22 behind Jason Holder and with a good chance of overtaking the West Indies captain during the ongoing Ashes series.

England skipper Joe Root (up two places to seventh) and Joe Denly (up 15 places to 90th) are other batsmen to move up in the latest rankings update, which also takes into account the first Test between India and the West Indies in Antigua and the second of two Tests between Sri Lanka and New Zealand in Colombo.

England fast bowler Jofra Archer has also made an impressive gain. He has moved up to 43rd position after only his second Test, finishing with eight wickets in Headingly including a remarkable six for 45 in the first innings.

Australia’s, Pat Cummins remains comfortably at the top of the bowling list despite losing six points while his fellow fast bowler Josh Hazlewood has moved from 15th to 12th place after finishing with nine wickets in the match. Batsman Marnus Labuschagne’s two half-centuries have lifted him 45 places to 37th.

Sri Lanka, on the other hand, may have lost the second Test to New Zealand but captain Dimuth Karunaratne has continued his good run, reaching a career-best sixth position after scores of 65 and 21, while Dhananjaya de Silva has gained 10 places to reach 46th position.

For the visiting side, player of the match Tom Latham has moved up five places to a career-best eighth position while batsman BJ Watling, all-rounder Colin de Grandhomme, fast bowler Trent Boult and the spin pair of William Somerville and Ajaz Patel have all gained in the latest rankings update.

Meanwhile, there has been no change of positions in the ICC Test Team Rankings, which is led by India.