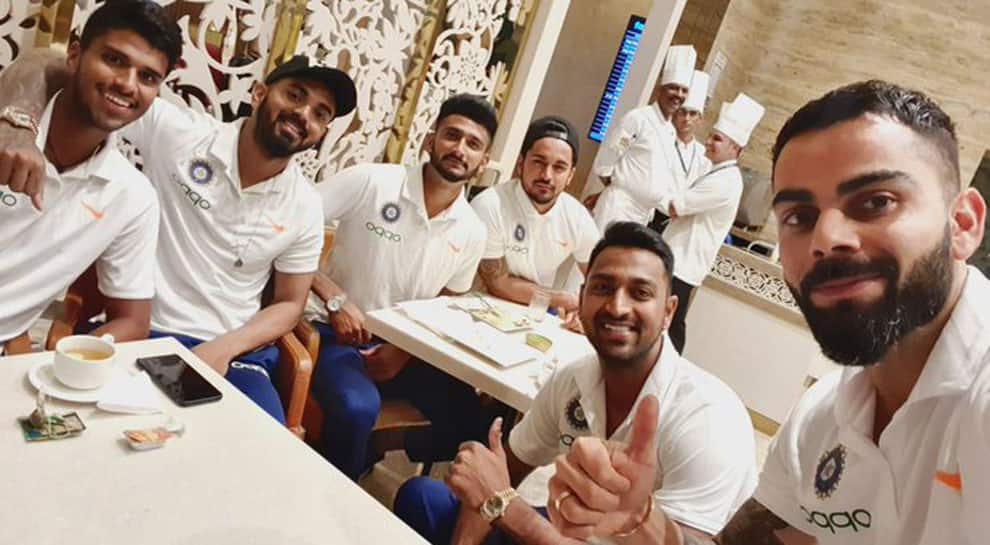 Indian skipper Virat Kohli, who has recently brushed aside all the rumours of a rift between him and opener Rohit Sharma, on Monday took to social media and shared a group picture featuring him along with some other members of the national side before their departure for the tour to West Indies.

Taking to his official Twitter handle, Kohli posted an image of him along with Indian opener KL Rahul, all-rounder Krunal Pandya and others with a caption 'Miami bound'.

The 30-year-old captain's tweet came before the Men in Blue's departure to Miami. After reaching Miami, the Indian team will board a flight to Florida, where they will play two T20Is of the three-match series against the West Indies from August 3.

Besides Kohli, Indian opener Shikhar Dhawan also shared a pre-departure picture of him with his opening partner Rohit Sharma.

"All set for West Indies with my partner - The Hit-man!" he wrote.

All set for West Indies with my partner - The Hit-man!  @ImRo45 pic.twitter.com/2ypHn8WNVR

Speaking at a press conference just before the team's departure for West Indies, Kohli had dismissed speculation that all was not well between him and vice-captain Rohit Sharma saying that it is because of team chemistry that the national side has climbed the summit of international rankings.

"It baffles you as a player and team when such lies come out. It is bizarre, If the atmosphere in the team is not well, the team would not have been so consistent so far. We have climbed from No. 7 to No. 1. This cannot be done without the camaraderie between the players," he had said.

India, who will be playing their first set of fixtures since their semi-final exit at the 2019 ICC World Cup, are also slated to play three-match ODI series and two-match Test series against West Indies from August 8 onwards.