MS Dhoni is a legend of the game: Virat Kohli

Indian skipper Virat Kohli once again has come to defence of underfire MS Dhoni, saying the wicketkeeper-batsman is a "legend of the game" whose keen understanding and experience has held the team in good stead and won them many matches over the course of the years. 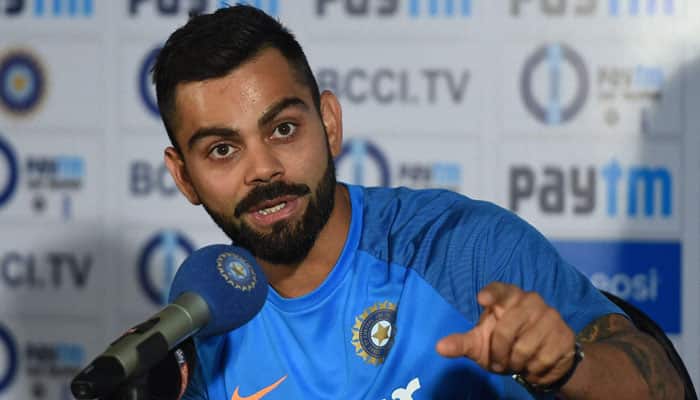 Manchester: Indian skipper Virat Kohli once again has come to defence of underfire MS Dhoni, saying the wicketkeeper-batsman is a "legend of the game" whose keen understanding and experience has held the team in good stead and won them many matches over the course of the years.

"Dhoni knows exactly what he wants to do in the middle. When he has an off day here and there, everyone starts talking. We always back him. He has won us so many games. The best thing about having someone like him is when you need those 15-20 runs, he knows exactly how to get them. His experience, eight out of 10 times has come good for us," Kohli said on Thursday after India's emphatic win over West Indies in the ongoing World Cup.

"We have quite a few players who play instinctive cricket and follow their game plans. He's such a keen understanding of the game. Always sends us feedback, that you know 260 is a good score. He's a legend of the game. We all know that. Just hope he can continue," he added.

Dhoni was criticised by many for his slow batting against Afghanistan where he took 52 balls to score 28 runs which had reduced India's scoring rate in the middle overs and the Men in Blue managed to score just 224 runs in their allotted 50 overs which eventually they were able to defend on the back of some disciplined bowling from Jasprit Bumrah and Mohammed Shami.

Legendary Indian batsman Sachin Tendulkar was among the ones who criticised Dhoni, saying that the stumper should have shown more positive intent during his time at the crease against Afghanistan.

Even on Thursday, Dhoni started off slowly and scored just 20 runs of the 40 balls he faced. However, later on, he scored at a brisk pace and finished with unbeaten 56 off 61 balls, thus helping India to post a par 268/7 at the Old Trafford. During the course of his innings, the 37-year-old scored three boundaries and two sixes.

It was the strong bowling line-up of India which once again came with a brilliant performance to bundle out the Windies for 143, thus helping the Men in Blue register a 125-run victory in Manchester.

"Things haven't gone our way with the bat in the last two games, but we have still done well to win, that's being the most pleasing thing," said Kohli while pointing out that the batting department needs to improve.

"Last two games, things haven't gone like we thought they would. These haven't been massive scoring games. But we've found ways of winning. Intensity has been the standout thing for me. Mindset really matters. Nothing is impossible. We feel we can win from any situation," he added.

With the win, India have now 11 points from six games and are placed below Australia who are at the top of the standings.