New Zealand have only won one Test in Australia since their sole series triumph across the Tasman Sea in 1985-86. 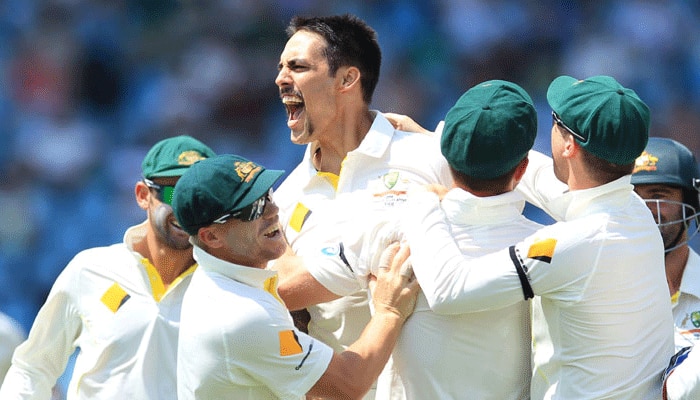 A watchful Australia attempted to bat New Zealand out of the first Test during a sedate middle session on day three, as the hosts stretched their lead to 325 runs on Saturday.

Australia reached the dinner break at 75 for one in their second innings with Joe Burns 32 not out and Marnus Labuschagne unbeaten on 18.

Labuschagne, who has scored three straight tons, was dropped on four by a diving Colin de Grandhomme at mid-wicket.

David Warner, who passed 7,000 Test runs, was Australia’s sole loss after he miscued a pull shot off Tim Southee on 19. His sluggish 63-ball innings was in contrast to his majestic unbeaten 335 in the last Test against Pakistan in Adelaide.

Australia’s tactical approach to bat carefully and build an impregnable lead was exemplified by Burns, who did not score until the 25th delivery he faced.

The hosts gained a sizeable 250-run first-innings lead after bowling New Zealand out cheaply on the stroke of tea.

New Zealand, in reply to Australia’s first innings 416, struggled against sustained bowling in the day-night match and were dismissed for 166 with Ross Taylor top-scoring on 80.

Mitchell Starc claimed his second five-wicket haul in as many Tests after missing most of the recent Ashes series.

He led a disciplined attack which was short-handed after Josh Hazlewood was ruled out of the Perth Test having suffered a hamstring injury on day two.

Both teams are without a paceman after debutant New Zealand quick Lockie Ferguson, himself a replacement for injured spearhead Trent Boult, damaged his calf on day one.

Watling chopped onto his stumps and was bowled by Pat Cummins for eight, while Taylor edged to slip off-spinner Nathan Lyon.

Oppressive weather conditions continued for the third straight day as the temperature peaked at 41 degrees Celsius.

New Zealand have only won one Test in Australia since their sole series triumph across the Tasman Sea in 1985-86.