Those commenting on MS Dhoni can't even tie their shoelaces: Ravi Shastri lashes at critics

Lashing out those raising doubts over the lack of clarity over former Indian skipper MS Dhoni's future, India head cricket coach Ravi Shastri said that “Half the guys commenting on him (MS Dhoni) can't even tie their shoelaces”. 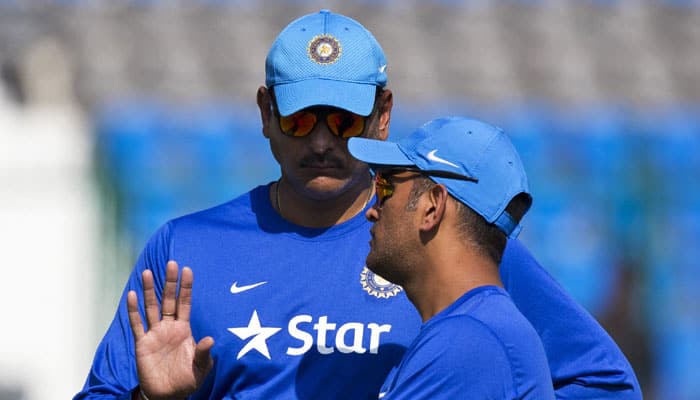 NEW DELHI: Lashing out those raising doubts over the lack of clarity over former Indian skipper MS Dhoni's future, news agency IANS quoted  India head cricket coach Ravi Shastri as saying in an interview that “Half the guys commenting on him (MS Dhoni) can't even tie their shoelaces”.

Shastri further said that after dedicating 15 years playing for India, making statements at Dhoni's expense is "downright disrespectful" and added that "MS Dhoni has earned the right to retire when he wants to. And let this debate end once and for all."

"Half the guys commenting on can't even tie their shoelaces. Look at what he's achieved for the country. Why are people in a hurry to see him off? Maybe, they don't find enough talking points. He and everybody who knows him know he'll be going away soon. So, let it happen when it has to."

Amid constant speculations on Dhoni's future in international cricket, Ravi Shastri pointed out that Dhoni timed his retirement in Tests perfectly and that he has earned the right to do it in his own way when it comes to the limited-overs formats of the game. "When he retired from Test what did he say? That Wriddhiman Saha was good enough to be handed over the wicket-keeping gloves. He was correct. He's been a shadow when it comes to the team, always sharing his mind, lending his views, " India head coach said.

However, Shastri suggested that the World Cup-winning captain will be putting an end on his international career soon, but the call has to be left with him only."He and everybody who knows him know he`ll be going away soon. So, let it happen when it has to.

Dhoni was not picked for the upcoming three-match T20I series against Bangladesh and was not made clear whether the 39-year-old wicketkeeper made himself available for selection or not. However, Chief Selector MSK Prasad had stated that they are moving on from MS Dhoni to give more chances to younger wicket keepers like Rishabh Pant and Sanju Samson.

Legendary Indian wicket-keeper batsman MS Dhoni made his first public appearance when he arrived at the JSCA Sports Complex in Ranchi to meet the members of the Indian team on Day 4 of the third Test against South Africa, leading to renewed speculation among fans and critics alike as to whether he has had a conversation with the skipper Virat Kohli or head coach Ravi Shastri about his future.

MS Dhoni has not played for India since the semi-final loss to New Zealand at World Cup 2019. Dhoni went on a sabbatical and joined the Territorial Army -- 106 TA Battalion (Para) in Jammu and Kashmir on July 30, training Battalion for 2 weeks. Dhoni was not available for selection for India's tour of West Indies and their recently-concluded home series against South Africa.

Backing MS Dhoni, the newly-appointed Board of Control for Cricket in India (BCCI), former India skipper Sourav Ganguly said that Dhoni is a champion and champions do not finish that easily. The legendary batsman added that Dhoni will get due respect during his tenure as the BCCI president.