We have not been able to step up as top-order, admits West Indies' Jason Holder

After getting bowled out for 222 in the first innings against India on day three of the first Test match, West Indies skipper Jason Holder expressed disappointment with the top-order, saying the batsmen failed to step up. 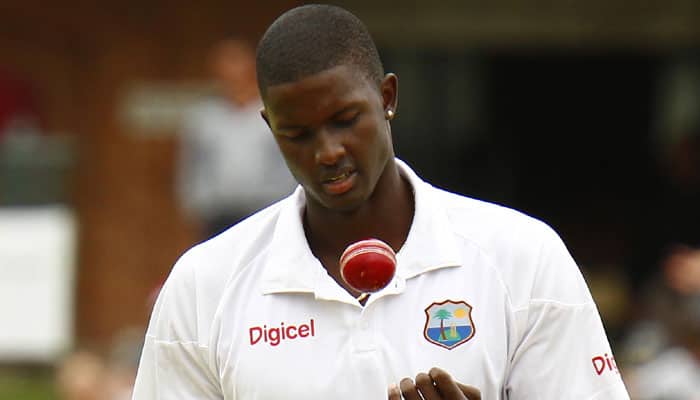 After getting bowled out for 222 in the first innings against India on day three of the first Test match, West Indies skipper Jason Holder expressed disappointment with the top-order, saying the batsmen failed to step up.

His remarks came after the close of play on day three as India ended the day at 185/3 with a lead of 260 runs with Virat Kohli and Ajinkya Rahane still at the crease.

"Extremely disappointed. It`s been a common thing for our batsmen now. We have not been able to step up as a top-order, the middle and lower order have done an exceptional job. We are behind the eight ball because we did not bat well in the first innings," Holder told reporters.

"The boys are fighting, the effort was exceptional, we have been in the match with the bowling effort. We kept toiling away, it is not a surface on which you can bowl out a side cheaply. We hope to restrict India and then chase down the total," he added.

Holder expressed faith in his bowlers and also credited the pace attack.He lauded Kemar Roach for his consistency, saying the bowler has been the standout pacer in the match.

"Bowlers are doing an exceptional job. India is scoring at two and a half runs per over, we are fighting very hard. The body language has been right up there. We got early wickets and they built a partnership in the first innings. We just need to play smart cricket in the remaining match," Holder said.

"Kemar has been brilliant. We as a fast-bowling group, have done a good job. Kemar keeps you guessing, there is never a situation in which he gets predictable. It is a plus having Kemar in this side. He makes something happen with the ball. Yes, Ishant got five wickets in the first innings, but in my opinion, Kemar has been the standout bowler in this match," he added.

On day three, Holder was able to show some resilience with the bat but as soon as he got dismissed after playing a knock of 39 runs, Windies innings folded for just 222. Kohli and Rahane are unbeaten on 51 and 53 respectively and India would resume day four at 185/3.