We wanted to test ourselves after heavy Hamilton loss: Indian skipper Rohit Sharma

Rohit heaped praise on Rayudu and Shankar, saying their partnership was the turning point of the match. 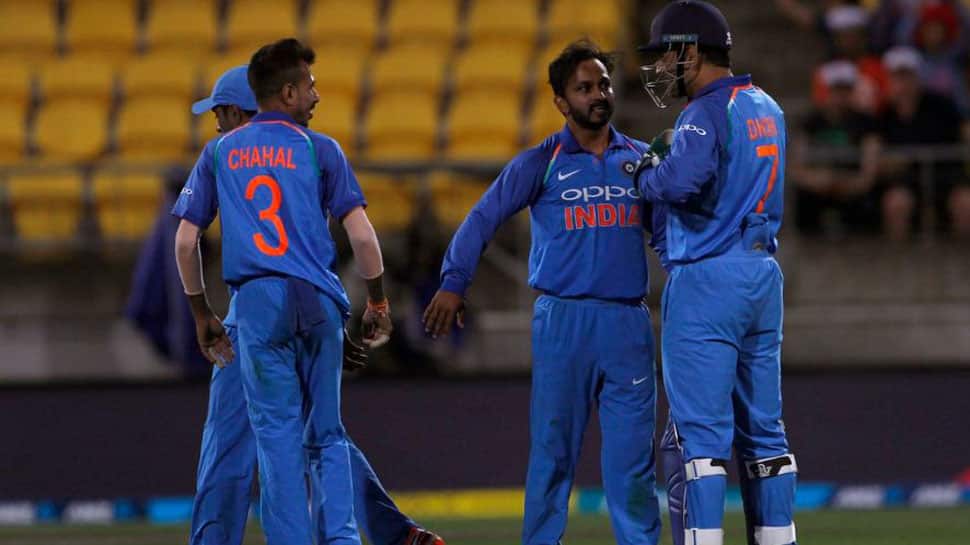 Stand-in skipper Rohit Sharma on Sunday said that his side wanted to test themselves in tough conditions after the Hamilton loss, and lauded his team for showing character in the fifth ODI which India won to clinch the series 4-1 against New Zealand.

India suffered a heavy defeat in the fourth ODI after they were dismissed for just 92 runs, but the visiting side bounced back in the fifth match on Sunday to score 252 before winning by 35 runs.

"The Hamilton loss, the way we lost was big. We need to get together as a team. I knew there was some moisture on the pitch," Rohit said after India beat the home side by 35 runs.

Ambati Rayudu (90) and Vijay Shankar (45) shared a 98-run partnership to resurrect the Indian innings, before Hardik Pandya (45 off 22) and Kedar Jadhav (35) powered them to a competitive total.

Rohit heaped praise on Rayudu and Shankar, saying their partnership was the turning point of the match.

"After we lost four wickets, all we needed was somebody to show application. Rayudu and Vijay Shankar did that. The partnership between them turned the game for us and the way Hardik and Kedar played in the end was magnificent. We showed a lot of character," he said.

India fielded two fast-bowling all-rounders in Hardik Pandya and Shankar for the first time and Rohit said that they wanted to try out as many combinations possible ahead of the World Cup.

"Kedar gives us that balance being a second spinner. I consider him a proper spinner because every game he bowls 6 or 7 overs and gets a wicket as well. Even today, the wicket of Kane Williamson, it was a crucial point. He came and broke that partnership."

"Because we will be playing nine games in World Cup, and anything can happen, injuries, being out of form, so we wanted to try our every combination."

Young Shubman Gill could not grab the two opportunities that he got in the last two ODIs but Rohit said the lessons learnt here will go a long way in his career.

"He is a real good talent, with just two odd games, you can't judge. This will give him a lot of learning. He is a top order batsman, he will be in those type of situations where ball is swinging around, so it will help him. He has done well and I don't find any reason why he can't play longer for India."

He also lauded the efforts of the bowlers for producing crucial breakthroughs.

"The wicket got flat in the end, but at one point it looked like an easy chase. The bowling unit came together at this stage and got us through," he said.

"Wasn't easy after losing four wickets at the start. Thought 250 was a very good score on that pitch. The bowlers got crucial breakthroughs at critical moments. I couldn't ask for more," he added.

"When you want to win games, you need a right balance, especially when Bumrah is not here. Coming here and beating NZ at home is never easy and they are a good travelling team as well. 4-1 is a great achievement."

Rayudu, who was adjudged as the player of the match, said it was tough to face a good attack and his idea was to preserve wickets and take the match to the end.

"It was tough against a quality attack. I was thinking we should take the game to the 30th over without losing a wicket," he said.

"It's important to stay prepared. The game in Hamilton was a one-off. Great effort by our bowlers to defend it."

"First of all a different surface. They got to a par total, maybe a few more. We knew it would be tricky, but we did not take it further. We just lost wickets at the wrong time. They did it very well," Williamson said.

"Rayudu played well with 90. Then they put the pressure back on us -- it's a lesson for us. Their accuracy was great. Tommy Latham and me could have taken it further. Credit to India, they taught us a lesson and they deserve the series win."

"I suppose as batsmen we need to soak that pressure up and take those decisions. Throughout the series, they got us under more pressure. We were able to revert the pressure but not long enough and often enough."

Mohammed Shami was adjudged as the player of the series for taking nine wickets in the series, including the two-wicket haul in the fifth ODI.

India will now take on New Zealand in the three-match T20I series, starting on Wednesday.

Indian team competitive in any part of world and on any surface: Sachin Tendulkar