Mitchell Starc did most of the damage for the visitors, who came into the contest at Bridgetown after being hammered 4-1 in their T20 series, with a superb 5/48 which included the wicket of Kieron Pollard who came back into the side after a hamstring problem. 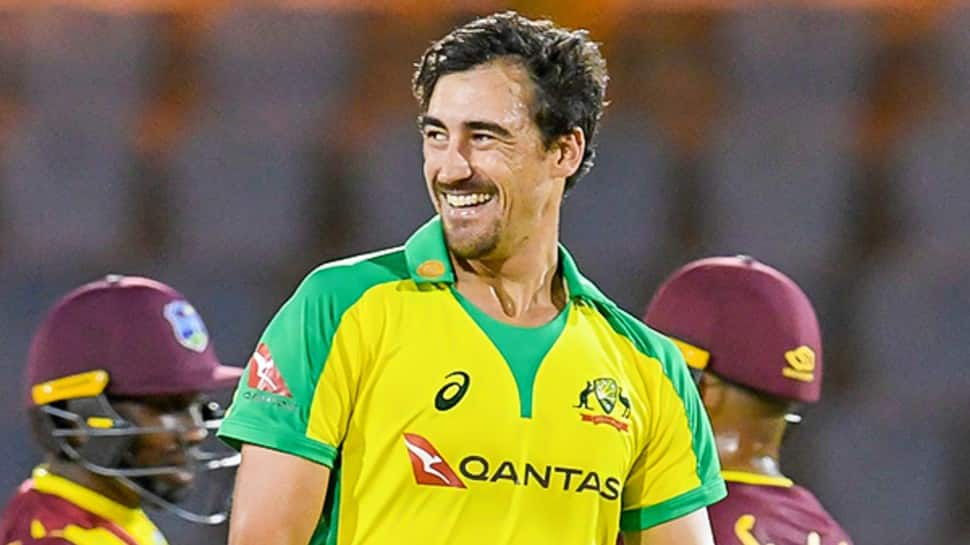 Australian paceman Mitchell Starc celebrates after picking up a wicket against West Indies in the first ODI. (Source: Twitter)
Share:
Written By:

Australia’s stand-in captain Alex Carey scored a half-century and pace bowler Mitchell Starc took five wickets as they beat West Indies by 133 runs in a rain-hit opening match of their one-day international series in Barbados on Tuesday (July 20). Chasing a Duckworth-Lewis-Stern (DLS) adjusted 257 runs for victory after Australia scored 252-9 in 49 overs after three rain delays, the hosts suffered a collapse to fold for 123 with only returning skipper Kieron Pollard (56) offering resistance.

Starc did most of the damage for the visitors, who came into the contest at Bridgetown after being hammered 4-1 in their T20 series, with a superb 5/48 which included the wicket of Pollard who came back into the side after a hamstring problem. It was Starc’s eighth five-wicket haul in ODI cricket which helped him surpass countrymate Glenn McGrath’s haul of seven five-wicket bursts

Josh Hazlewood also impressed with 3/11 from six overs as the visitors took a 1-0 lead in the three-match series. Carey, filling in for regular skipper Aaron Finch who aggravated a knee problem in last week’s fifth T20 between the teams, won the toss and elected to bat as Australia made a steady start at Bridgetown. Josh Philippe (39), Ben McDermott (28) and Mitchell Marsh (20) all got starts but it was the skipper who made the most with 67 off 87 balls.

Along with Ashton Turner (49), he added 104 runs for the fifth wicket before the team capitulated, with West Indies leg-spinner Hayden Walsh picking up his maiden ODI five-wicket haul in the space of 16 balls.

“I thought the wicket might have played a bit different to what it did. But for us to adapt and put a score on the board, but then for the Powerplay to go the way it did for us was fantastic,” Carey said.

“Ashton played a crucial role. I was probably cruising along a bit and he was getting on with it, he took the pressure off.”

Pollard said he was impressed with his bowlers despite the defeat. “Par score here is about 260-270. Being able to restrict them to about 250-odd I think was a fantastic effort by the bowlers,” Pollard said.

“If I’m brutally honest I thought we gave away about 20-25 runs in the field with some freebies.”