My clothes are simple, not made by designers, says PM Modi to students

Prime Minister Narendra Modi on Friday said he likes to dress in a "simple and sober" manner and that his clothes were not made by any fashion designers. 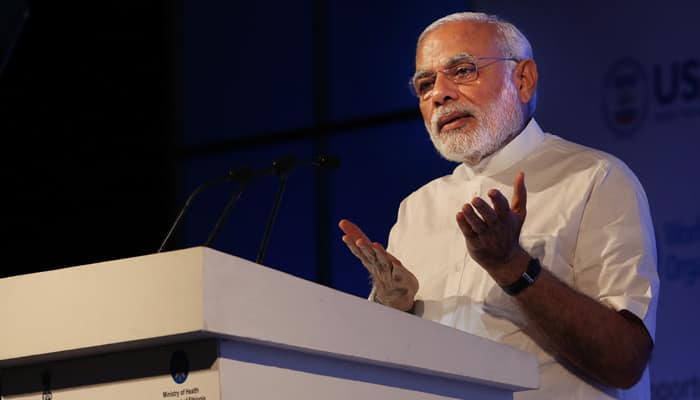 New Delhi: Prime Minister Narendra Modi on Friday said he likes to dress in a "simple and sober" manner and that his clothes were not made by any fashion designers.

Asked by a student about his fashion sense and the man behind it, Modi said: "I don't know why people think I have a fashion designer who styles me. I only dress simple and sober."

The prime minister was speaking to students on the eve of Teacher's Day here at the Manekshaw Centre. His interaction with students was broadcast to schools on big screens across the country.

The prime minister also narrated a story how he shortened his full-sleeved Kurta in his childhood days.

"I had to wash my clothes myself and full-sleeved shirts would take more time to clean, so I shortened off the sleeves. It made my work easier and I started wearing more short-sleeved clothes."

He said as Gujarat has moderate climate, the half-sleeved kurta "kept him cool and he could easily carrying them."

Modi said he always liked to dress well, and being from a modest family, there was no money to get his clothes ironed. He overcame this by putting smouldering charcoal in a round bottomed vessel, a lota, and used that as a pressing iron.

He said he did believe that one should dress for the occasion and well.

He also told students how he used to whiten his canvas shoes in his school days. "I used to take chalk butts left behind by the teachers and rub it on my shoes to whiten them," Modi said.

It is the second year that the prime minister is interacting with students on the occasion of Teachers' Day, which celebrates the birthday of India's second president Sarvepalli Radhakrishnan.

Dating tips: Know how to floor your girl!