'Baby' review: Action hero Akshay Kumar is a sure winner! 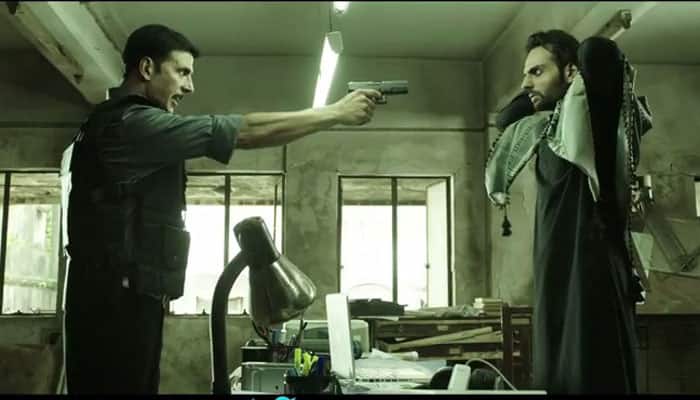 All proud Indians have waited long for this to come. Filmmaker Neeraj Pandey's 'Baby' is by no means a little baby in terms of its content and screenplay. This film nips in the bud of our country's perennial problem called 'terrorism'.

Akshay Kumar as an Indian undercover agent Ajay Rajput is as tough as any real 'hero' would be. The film captures certain key pointers of how the government and Indian Intelligence functions. The makers have used the real names of terror groups, which make it even more authentic and believable for the viewer.

The action thriller smoothly sails from one tip off to another—before catching the big fish, Maulana Mohammed Rahman played by actor Rasheed Naz in Saudi. Danny Denzongpa (Feroze Ali Khan) as chief officer of a secret test team named 'Baby' leads the pack of a of handful men who are ever ready to saacrifice their life for the sake of protecting their motherland. The film throws light on the lives of such dedicated officers, who lead all their lives with a hidden identity.

The filmmaker has taken full care in presenting the details of each and every aspect in the movie. Akshay's familial life, where he has two kids and wife (Madhurima Tuli) is shown to be completely unaware of this secret agents professional vocation.

How the 'Baby' team flies from one place to another, will surely give you an adrenaline rush. The thrill has been rightly kept intact in this Neeraj Pandey film. Ace actor Kay Kay,(Bilal), who plays an IM operative is the man 'Baby' team is looking for. The entire search operation from India to Saudi will keep the viewers at the edge of their seats, while Akshay, Anupam Kher and Rana Daggubati make use of their shooting skills and exceptionally brilliant mind. The performance by each of the actors is worth many pats on their backs.

There is a sequence in the movie, where Akshay deploys a female officer (Tapasi Pannu) as a honey trap to get hold of a key aide named Wasim (played by Sushant Singh). The superb fight scene between Sushant and Tapasi will make you clap for once—as for the first time an actress is given more hard-hitting fighting acts than the villain. She packs a punch on Sushant's face—and we pat a clap for her.

The chase game finds an interesting twist when Akshay and Rana find Rahman with Bilal inside his hotel room. How the efficient team led by Akshay manages to get hold of Rahman and fly him to India from Saudi is a delightful experience filled with lots of thrill.

Amidst all the escalating tension, we do get our Akshay jokes. The fans won't be disappointed as Akki's humour is intact even this action packed thriller. The dialogues too are kept minimal, with more stress on action.

Pakistani actor Mikaal Zulfiqaras (who features in several Pak dramas) as Ashfaq in the film deserves a special mention. His dashing stature can make girls fall for him (yes even while watching this intense reel). He does make you go wow for once.

Interestingly, Rahman bears a striking resemblance to one of the most sought-after terrorists. His absolute end in the film clearly gives out the ever burning hope of wanting to see this happen in real life too. The fact that innocent minds are captivated and influenced in the name of religion, must be seen as one of the biggest issues that our country is dealing with. Akshay Kumar has taken his action hero image to the next level with 'Baby'.

It is a must watch entertainer for every Indian. Go grab your tickets!