PM dismissed claims by some political pundits that the BJP might not get more than 180 out of 543 seats in the 2019 polls. 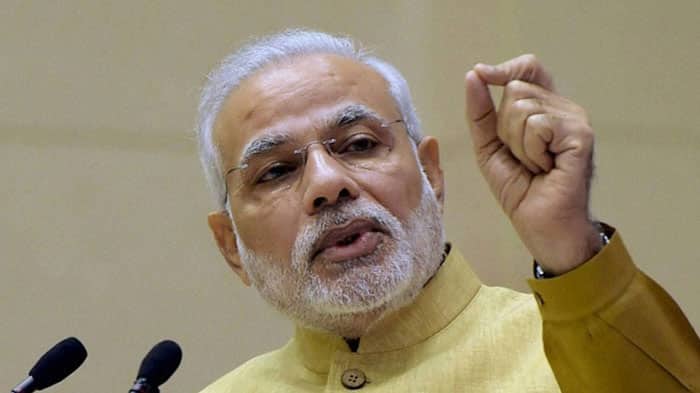 NEW DELHI: The 2019 Lok Sabha elections will be a "public versus coalition" contest, Prime Minister Narendra Modi said on Tuesday while ridiculing the alliance proposed to be formed by anti-BJP parties.

In an interview to ANI, the PM dismissed claims by some political pundits that the BJP might not get more than 180 out of 543 seats in the Lok Sabha elections, saying there were a similar "set of persons" who echoed a similar narrative even in 2014.

The Prime Minister was responding to a question about whether people had now considered the `Mahagathbandhan` as an alternative to PM Modi.

He expressed confidence that the people will again repose faith in the BJP considering the work done by his government over the last four and a half years.

"I believe, this election is going to be a contest between those who fulfill and take forward the aspirations of the people and those who stop these aspirations. There is an experience of 70 years. The public is the decider," the Prime Minister said when asked if the 2019 elections were heading towards a US Presidential style of elections between Modi versus Rahul.

Asked whether the upcoming Lok Sabha polls would be "anybody but Modi` contest as projected by the opposition parties, he said, "It is going to be `janta (public) versus gathbandhan (coalition). Modi is just a manifestation of public love and blessings," he added.

#PMtoANI on whether 2019 elections would be anybody vs Modi: It is going to be 'Janta' versus 'gathbandhan'. Modi is just a manifestation of public love and blessings. pic.twitter.com/kO5rjHjJPa

Ridiculing the coalition sought to be formed by some anti-BJP parties, he said, "the public knows that earlier it was decentralised corruption, those who sat in the states, looted the states, those who were in the Centre, looted at the centre... The people will decide whether or not they should ally with these forces of corruption who are coming together."

The Prime Minister`s attention was drawn to the "180 club" claim by some sections, inferring that the BJP might not get more than 180 seats in the Lok Sabha polls.

In his response, he said, "Is there any scientific study? In 2013 too, the same set of persons used to talk the same thing about BJP getting less than 180 seats. That narrative continues."

He went on to add, "If they do not spread such things, how will people join their `gathbandhan`? They will have to talk big to attract people."

Asserting that BJP has no reason to "mistrust the intelligence of the common man", PM Modi said, "I keep telling all political pundits to let us trust the common man`s intelligence. After all, what did the common people experience from this government that they will go away from us? I have faith in the public, their intelligence."

Attacking the anti-BJP parties who are trying to firm up an alliance, he said there is no unity among them in any way, nor any joint articulation about what they would do for the country.

To press his point, he said if media reports of last five years are analysed, there is nothing concrete that the `gathbandhan` has said or done unitedly."They still speak in different voices. Who are these people? They are looking for each other`s support to save themselves... They hold each other`s hand so that they are saved. That is the game," PM Modi said.

"Their single point agenda is Modi, do this to Modi, do that to Modi...There is no articulation on what they would do for the nation and why they will do it," the Prime Minister said.

He said the anti-BJP coalition had failed already during its experiment in Telangana Assembly elections and local polls in states like Assam and Jammu and Kashmir.

"At the top, these (coalition) leaders may get together for their safety but that does not mean that public is joining them," PM Modi said.

PM Modi`s attention was drawn to the allegation by Andhra Pradesh Chief Minister and TDP leader Chandrababu Naidu that the efforts being made by Telangana Chief Minister and TRS supremo K Chandrashekar Rao to form an alliance has the blessings of PM Modi.

"I am not aware that some coalition is being made by KCR," PM Modi replied.

The Prime Minister was also asked about the unhappiness expressed by some of the BJP allies, like Shiv Sena, from time to time and whether they were indulging in "muscle flexing".

His attention was particularly drawn to Shiv Sena chief Uddhav Thackeray`s apparent attack on him when he said that `chowkidar chor hai (guard is the thief), echoing Rahul Gandhi`s oft-repeated line of attack on Narendra Modi.

In his response, he said, "Sometimes, some expectations are not met" and some allies feel that they "could benefit by putting pressure" on the BJP."

''Some (allies) feel that such issues could be resolved through discussions.... But our effort is to take everyone along and listen to everyone," PM Modi added.

"That is why BJP is more successful,'' he said.

Queried whether BSP would be joining the NDA, he said, "I don`t think any sensible person will spell out such things on TV, as to who will join and who cannot."

Asked whether there was any move by film stars-turned-politicians Rajnikanth and Kamala Hassan to join the NDA and improve the NDA`S footprint in South India, he said, "We are continuously striving to expand our base. We are ready to take everyone along, those who want to come with us, those with whom we can walk. It is linked to our strengthening the regional aspirations."

Those considered first family are out on bail: PM Narendra Modi attacks Congress