After three people were killed in a massive fire that broke out in a rubber factory in Delhi's Jhilmil Industrial Area, Chief Minister Arvind Kejriwal on Saturday announced a compensation of Rs 5 lakh to each of the deceased. 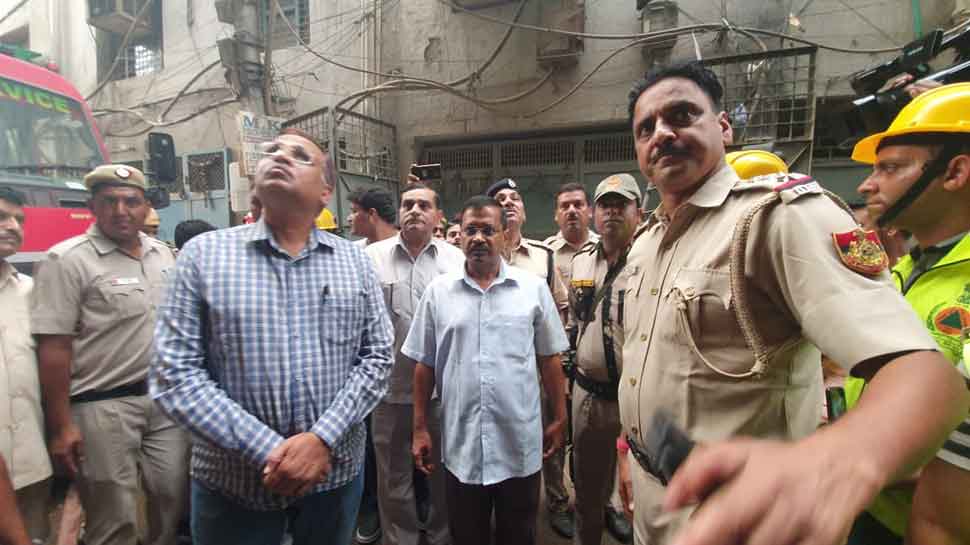 New Delhi: After three people were killed in a massive fire that broke out in a rubber factory in Delhi's Jhilmil Industrial Area, Chief Minister Arvind Kejriwal on Saturday announced a compensation of Rs 5 lakh to each of the deceased.

Kejriwal made the announcement after visiting the incident site accompanied by Industries Minister Satyender Jain to take stock of the situation.

Earlier in the day, a major fire broke out in a hardware factory in Shahdara's Jhilmil at around 9 am. Fire tenders were rushed to the spot to douse the blaze.

"Fire police brigade was able to save the lives of two people. However, three people could not be saved and we express condolences to the families of the deceased, " Kejriwal said while interacting with media after his visit.

Delhi CM @ArvindKejriwal announces compensation of ₹5 Lacs to family of those who lost their lives in the accident.

3 men lost their life in this unfortunate incident where fire broke out in a factory in Jhilmil Industrial area. pic.twitter.com/bx5zshN7w0

Lauding the Fire Brigade Service for their best efforts which saved two lives, he further said that rescue operations are still going on and the work of cooling off the premises is on.

Earlier, the chief minister had tweeted," Shocked to know about three deaths in a factory fire in Jhilmil Industrial area. Fire Services personnel tried their best to bring the fire under control in hostile conditions. Am visiting the site wid Industries Minister."

I visited the site. Brave Delhi Fire Service warriors saved two lives in Jhilmil factory fire. Despite their best efforts, they cud not save the other three. Heartfelt condolences to their families. Reasons of fire still being investigated. https://t.co/UmQkNqUl37

The cause of the fire has not been ascertained yet. CM Kejriwal said an investigation has been launched into the incident and appropriate action will be taken accordingly

In January 2018, around 17 people lost their lives after a massive fire broke out in a firecracker storage unit in Delhi's Bawana Industrial area.