Union Home Minister Amit Shah along with Karnataka Chief Minister BS Yediyurappa will conduct an aerial survey of the flood-affected area of the state on Sunday. 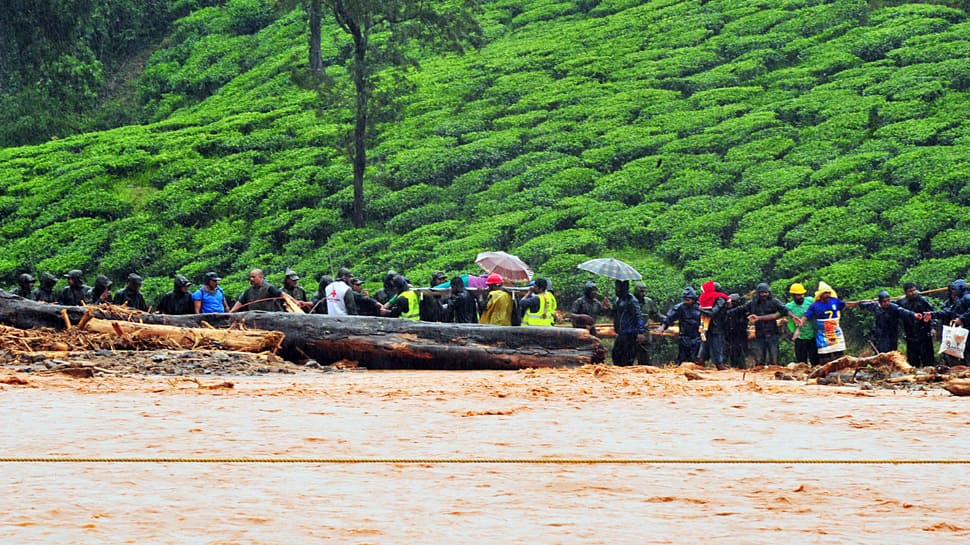 Flight operations at Cochin International Airport resumed from 12 pm on Sunday and the intensity of rainfall is likely to reduce in the states of Kerala, Karnataka, and Gujarat even as incessant rainfall wreaked havoc in the states, claiming over a 100 lives and displacing lakhs of others.

The India Meteorological Department (IMD) said that very heavy rainfall was likely at isolated places over Saurashtra and Kutch, parts of Tamil Nadu, Kerala, Karnataka, Konkan and Goa, Madhya Maharashtra. It further said a fresh low-pressure area was likely to develop over the Bay of Bengal around August 12.

Meanwhile, Meteorological Centre Thiruvananthapuram on Sunday issued a red alert for three districts of Kerala. A red alert detonates likelihood of extremely heavy rainfall directing the authorities to take action. The districts where a red alert was sounded are; Wayanad, Kannur, and Kasargod. An orange alert has been issued for six districts of the state for Sunday.

Kerala has been the worst-hit by the fury of monsoons as around 50 people lost their lives across the state which was hit with massive landslides and severe waterlogging causing the flood-like situation.

All operations at the Cochin airport were suspended on Friday as the runway area in the airport got completely waterlogged due to the floods.

Chief Minister Pinarayi Vijayan took to Twitter on Saturday and said, "57 lives have been lost. There are now 1,318 flood relief camps operating across the state. These camps host 1,65,519 persons from 46,400 families."

The maximum number of deaths were reported from Malappuram (19), followed by Kozhikode (14)  Wayanad (10).

Union Home Minister Amit Shah along with Karnataka Chief Minister BS Yediyurappa will conduct an aerial survey of the flood-affected area of the state. They will be conducting a meeting with the senior officials to evaluate rescue and rehabilitation measures even as the CM declared the floods as the biggest calamity in 45 years.

Heading to Belagavi for an aerial survey of the flood affected areas along with Hon’ble @HMOIndia, Shri @AmitShah ji. Will be conducting a meeting with the senior officials to evaluate rescue & rehabilitation measures.

Over 24 people have lost their lives in various rain-related incidents and the Karnataka government said the state has suffered a loss of Rs 6,000 crore while seeking relief of Rs 3,000 crore from the Centre.

In Maharashtra, around 30 people died in the past week even as several parts of Satara, Sangli, and Kolhapur continued to be submerged on Saturday. The heavy rainfalls have ceased to pour, yet the water level in the city has not come down.

On Saturday, a total of 569 personnel in 37 teams with 95 rescue boats were deployed in Sangli district belonging to varying ranks of NDRF/SDRF/Territorial Army/Navy and district administration, according to Divisional Commissioner Office, Pune.

✔️All additional 15 teams of @indiannavy from Visakhapatnam had reached Kolhapur & on the job since evening.

In Kohlapur district, a total of 456 personnel in 48 teams with 74 rescue boats were deployed for rescue and relief operations. 15 additional teams belonging to the Navy were brought in from Vishakhapatnam to assist in rescue operations. On Saturday, the Kohlapur airport handled 30 operations including landing & take off, as per a tweet by Maharashtra Chief Minister's Office.

In Gujarat, 98 persons have died due to floods and torrential rains this season. Incessant rains lashed across state's 251 tehsils over the last 24 hours. 26 out of the 30 gates of the Sardar Sarovar Narmada dam were opened for the first time since installation in 2017 to maintain the water level.