Congress maintains silence on SP-BSP tie-up; likely to go it alone in UP in LS polls

All India Congress Committee general secretary in-charge of Uttar Pradesh Ghulam Nabi Azad said the party would not react immediately and would come out with a detailed reaction in Lucknow on Sunday. 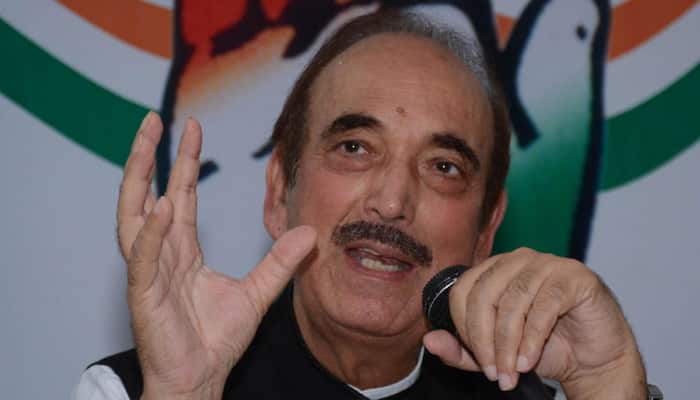 New Delhi: Left out of the SP-BSP alliance in Uttar Pradesh, the Congress is likely to contest the Lok Sabha polls on its own in the crucial Hindi heartland state, sources said.

The Congress leadership maintained a stoic silence and refused to comment on being left out of the alliance of regional rivals Samajwadi Party (SP) and Bahujan Samaj Party (BSP) for the high-stakes general election, which is only months away.

Azad and Uttar Pradesh Congress leaders have been meeting leaders from the western parts of the state for the past two days. The veteran leader said he, along with other leaders, would be meeting the leaders and workers of the party from central and eastern Uttar Pradesh on Sunday.

"We heard the press conference of the BSP and SP leaders. The party will come out with its stand in Lucknow on Sunday," Azad merely said, while refusing to react on the Congress being left out of the alliance. He said the party would not react on the announcement on Saturday and any leader commenting on the issue would be putting forth his personal view.
Asked whether the tie-up was a setback for the Congress, he refused to comment.

Madhya Pradesh Chief Minister and Congress leader Kamal Nath said there was a need for alliances in the entire country to defeat the BJP. He also said the saffron party got only 31 per cent votes in the 2014 Lok Sabha polls and claimed that it had the people's mandate, adding that even this happened because votes were split. However, party insiders felt that the SP-BSP tie-up was a blow to the Congress's efforts to unite all the opposition parties.

Congress spokesperson Manish Tewari said Azad would give a structured response to it on Sunday. "Insofar as alliances are concerned, we have always believed that state-specific alliances, which further the progressive and pluralistic ideals, which further consolidate the liberalised idea of India, are the way forward and I think there is space for that," he said.

The Congress has been seeking to stich an alliance in Uttar Pradesh, but its efforts suffered a dent as the SP-BSP left the Grand Old Party out of their poll tie-up but left the two seats of Amethi and Rae Bareli, currently represented in the Lok Sabha by Congress chief Rahul Gandhi and UPA chairperson Sonia Gandhi respectively. The SP-BSP alliance will not field candidates in these two seats.

The Congress had adopted a cautious approach on the issue of alliance, with its spokesperson Abhishek Manu Singhvi on Friday saying ignoring the party in Uttar Pradesh could be a "very dangerous mistake". He said the Congress might have "fallen on difficult times", but the objective of all the opposition parties should be to defeat the BJP and eliminate "autocracy, misgovernance" at the Centre.

Raja asserted that there was no difference among the secular parties and the seat-sharing arrangement would be amicably worked out among them. "All the secular, democratic parties and the Left parties must work together and ensure that the BJP is defeated in order to save the Constitution and take the country forward.

"The electoral pacts and seat-sharing arrangements will be state specific, taking into consideration the state-level realities. The parties must be realistic and accommodative to each other," he said. A Congress leader expressed confidence that the party was competent enough to go it alone in Uttar Pradesh and do well in the Lok Sabha polls.